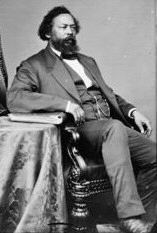 Benjamin Sterling Turner, a member of the United States House of Representatives from Alabama during the Reconstruction period, was born on March 17, 1825 in Weldon, North Carolina. He was raised as a slave and as a child received no formal education. In 1830 Turner moved to Selma, Alabama with his mother and slave owner. While living on the plantation he surreptitiously obtained an education and by age 20 Turner was able to read and write fluently.

While still a slave Turner managed a hotel and stable in Selma.  Although his owner received most of the money for Turner’s work, he managed to save some of his earnings and shortly after the Civil War he used the savings he had accumulated to purchase the property.  The U.S. Census of 1870 reported Turner as owning $2,500 in real estate and $10,000 in personal property, making him one of the wealthiest freedmen in Alabama.

Turner also became a teacher in 1865 and helped establish the first school for African American children.  Two years later he became involved in politics.  After participating in the Republican State Convention in 1867, Turner was named tax collector of Dallas County.  The following year he won his first elective office when he became a Selma City Councilman.  In 1870 Turner was elected to the United States Congress as the first African American Representative in Alabama history.

While in office Turner proposed bills that contributed funding for Civil War-related damages to several federal buildings in central Alabama and St. Paul’s Episcopal Church. Turner was also appointed to the House Committee on Invalid Pensions and was responsible for issuing pensions to Union war veterans.  Through his influence African American veterans received a pension of eight dollars a month.

Benjamin S. Turner fought for impoverished black farmers. In February of 1872 he called for the elimination of the tax on cotton because it was harmful to many of his constituents.  He also argued that the tax was unconstitutional because it singled out a specific cash crop.  In May 1872, Turner demanded that the tax be refunded for the years 1866 to 1868. He also became one of the first Congressmen to call for reparations for the ex-slaves.  All of his proposals were ignored by Congress.

Turner ran for a second term in 1872 but was challenged in the Republican primary by another African American candidate, Philip Joseph, a free man before the Civil War and the editor of a local newspaper.  The black vote was divided and a white Republican won the primary and eventually the Congressional Seat.

Turner returned to Selma but was never able to revive his political career.  During an economic recession in 1877 Turner lost his business.  He returned to farming but was again unsuccessful in supporting his family.  He died impoverished and largely forgotten on March 21, 1894.