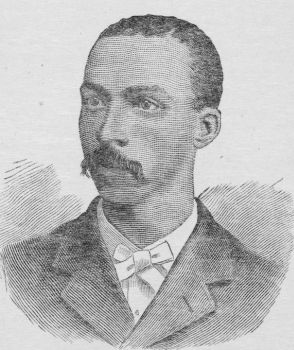 William Bolden Townsend, a journalist, educator, lawyer, and politician, gained fame through his campaigns against racist violence. He was born into slavery in Huntsville, Alabama in 1854.  His white, maternal grandfather, Samuel Townsend, emancipated him. William Townsend and his mother, Margaret (Richardson) Townsend, moved to Leavenworth, Kansas in the early 1860s.

He received a degree in preparatory education from the State Normal School at Leavenworth and then taught school in Mississippi. After working for ten years in the Leavenworth post office, he obtained a law degree from Kansas University and was admitted to the bar in 1891.

At the beginning of his career, Townsend believed racial uplift and economic ascendancy could be obtained by emulating white, middle-class moral and religious values. However, Townsend became decidedly militant in the 1890s when race relations began to deteriorate in Kansas. Prejudice against African Americans prevented blacks from obtaining financial stability and social justice. Angered by the rampant physical abuse, Townsend began applying his law degree to the defense of the black community and used his confrontational editorial and oratorical skills to champion civil rights.

Townsend often provoked quarrels with fellow Republicans. Although he was grateful for the party’s role in securing emancipation, he wrote editorials protesting its unjust distribution of patronage positions after exploiting the black vote. He disagreed with other Kansas blacks over the value of all-black conventions and conferences and squabbled over the distribution of aid with the three most prominent blacks in Western Kansas, A.T. Hall, Jr., E.P. McCabe, and John Niles. He regarded these men as self-serving politicians who wanted to line their pockets.  Despite his work in Republican politics, Townsend received a single appointment as assistant doorkeeper in the Kansas Senate in 1879. He was nominated, but defeated, as a delegate to the Republican National Convention in 1880.

As racial violence in Kansas increased, Townsend not only defended blacks in court, but also organized demonstrations. In 1901, whites retaliated when he launched a futile attempt to rescue an African American man, Fred Thompson, from a white mob.  Thompson was subsequently lynched, mutilated, and burned for the alleged rape of a white woman. Concerned about his safety, Townsend fled from Leavenworth to Topeka where he tried to establish a national civil rights organization. When he returned to Leavenworth in February 1892, irate whites burned down his home.

Townsend’s relationships with middle-class blacks also became precarious. They worried that Townsend’s inflammatory rhetoric would endanger their hard-earned gains. Furious over the lack of support from people he had once championed, he moved to Pueblo, Colorado with his wife, Martha, and established a new legal practice. He later moved to Denver and served as the clerk for the Judiciary Committee in the Colorado House of Representatives.