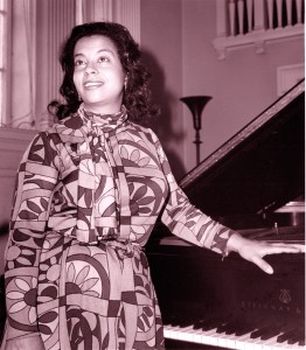 Concert pianist Natalie Hinderas was born Natalie Leota Henderson on June 15, 1927, to parents Abram Henderson and Leota Palmer Henderson in Oberlin, Ohio. Hinderas came from a family of accomplished musicians.  Her great-grandfather had been a bandleader and teacher, her father was a jazz pianist and bandleader who had toured Europe with his band, and her mother was a piano instructor at the Cleveland Institute of Music. She married Lionel Monagas and the two had daughter Michelle in 1964.

Hinderas started learning the piano at age three and had her first full piano recital when she was eight.  She debuted with the Cleveland Women’s Symphony Orchestra in 1939 at the age of 12, and was the youngest person ever to graduate from the Oberlin Conservatory’s Special Student’s School in 1945 with an honors degree in music. She won an audition for and attended the advanced study program at the Julliard School of Music in New York. Hinderas studied under prominent musicians at Julliard and continued her studies at the Philadelphia Conservatory of Music from 1948 to 1953.

After finishing at the Philadelphia Conservatory, Hinderas made her European debut and got a position with NBC-TV to make guest appearances on network programs. She gave televised recitals and concerts abroad as well, traveling to Austria, England, Germany, and Italy in 1957 and 1958.

Hinderas was committed to exposing new audiences to classical music and went on a four month tour with the U.S. State Department in 1959 to Northern and Central Europe, the Middle East, and Southeast Asia, giving concerts and lectures on American music; she went on another State Department tour in 1964. In 1966 Hinderas was hired as a faculty member at Temple University College of Music, where she taught and toured other colleges and music festivals. She began a tour of black colleges in 1968 where she performed music by black composers and gave lectures on African American classical musicians. As a consequence of that work she recorded and released the album “Natalie Hinderas Plays Music by Black Composers” in 1971.

Hinderas became the first black woman to appear as an instrumental soloist in the regular series of a major U.S. symphony when she played with the Philadelphia Orchestra in the fall of 1971. She then went on to play with a number of major orchestras across the nation.

Hinderas spent much of the rest of her life performing and giving lectures and programs on African Americans in classical music. She passed away on July 22, 1987 in her home in Philadelphia after suffering from cancer.