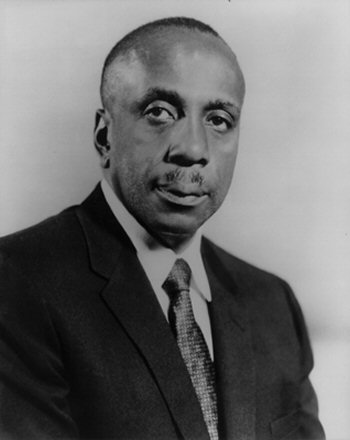 Howard Thurman was one of the most influential theologians of the 20th Century.  Born on November 18, 1900 in Daytona Beach, Florida, Howard Thurman was raised by his grandmother who had been a slave.  Thurman completed high school in Jacksonville, Florida and entered Morehouse College.  He graduated as valedictorian from the Atlanta, Georgia institution in 1923 and became an ordained Baptist minister two years later after receiving his seminary degree from Colgate-Rochester Theological Seminary, in New York.  Thurman also studied philosophy at Haverford College with Rufus Jones, a Quaker philosopher, mystic and pacifist.

Thurman traveled widely, often heading Christian missions and meeting with religious and political leaders.  In 1936 he led a “Negro Delegation of Friendship” to India where he met Mahatma Gandhi. Thurman would for the remainder of his life, attempt to live by the teachings of the Indian spiritual and political leader.

Howard Thurman began his professional career in 1925 as the minister at Mt. Zion Baptist church in Oberlin, Ohio.  Shortly afterwards he secured a joint professorship in Religion at Morehouse and Spelman Colleges in Atlanta, Georgia.  In 1932 he took the post of Professor and Dean at Rankin Chapel at Howard University in Washington, D.C. before becoming pastor of the Church for the Fellowship of All Peoples in San Francisco, California in 1944.  There Thurman headed one of the most prominent interracial churches in the nation.

By 1949 the Fellowship Church, as it was popularly called, had a multi-racial congregation of at least 250 members, half of them white, and the remainder black, Chinese, Japanese and Filipino. The church also had national associates like Eleanor Roosevelt, wife of President Franklin Roosevelt; the entertainer Josephine Baker and South African writer Alan Paton.  Fellowship Church generated an international reputation and had numerous supporters in Great Britain, Japan, South Africa, India, Iran, and Taiwan.

Howard Thurman wrote over 120 works, including 20 books.  His most famous book, Jesus and the Disinherited, published in 1949, used New Testament gospels to describe how a non-violent civil rights movement could be successful.  His book influenced a number of civil rights leaders including James Farmer, a founder of the Congress of Racial Equality and Martin Luther King, Jr., whose father was Thurman’s classmate at Morehouse College.

In 1953, Dr. Thurman was named by Life Magazine as one of twelve “Greatest Preachers of the 20th Century.”  Ebony called Thurman one of the 50 most important figures in African American history.

Dr. Thurman left Fellowship Church in 1953 to become the first African American Professor and Dean of Marsh Chapel at Boston University in Massachusetts, a post he held until his retirement in 1965.  Returning to San Francisco the same year, he became the Director of the Howard Thurman Educational Trust and Minister Emeritus at Fellowship Church.  Howard Thurman died in San Francisco on April 10, 1981 at the age of 80.

Howard Thurman, With Head and Heart: The Autobiography of Howard
Thurman
(New York: Harcourt, Brace and Company, 1979); Alfred Fisk and
Howard Thurman, eds., the First Footprints; the Dawn of the Idea of the
Church for the Fellowship of All Peoples. Letters between Alfred Fisk
and Howard Thurman, 1943 -1944 (San Francisco: Lawton and Alfred
Kennedy, 1975); http://www.howardthurmanbooks.org/;
http://www.pbs.org/thisfarbyfaith/people/howard_thruman.html.