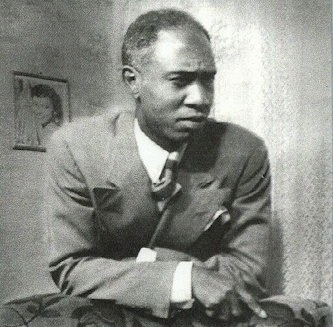 Born on February 6, 1898 in Moberly, Missouri, Melvin Beaunorus Tolson is known as one of the most significant African American modernist poets of his time. In addition, Tolson’s work as an educator led Langston Hughes to declare him “the most famous Negro Professor in the Southwest” in the mid-twentieth century.

Although Tolson began his college career at Fisk University in the 1920s, he transferred to Lincoln University, where he completed a bachelor’s degree in 1924. Shortly after graduating, he accepted a position as an English and Speech instructor at Wiley College in Marshall, Texas. Tolson also served as the football coach, play director, and speech and debate coach. Under his direction, Wiley’s speech and debate team maintained a ten-year winning steak between 1929 and 1939. In 1935, the team won a National Championship over the University of Southern California (USC).

In 1930, Tolson took time away from his full-time teaching and coaching career to pursue a master’s degree at Columbia University in New York City, New York. Tolson resumed his position at Wiley in 1931 but completed his master’s degree from Columbia’s department of English and Comparative Literature in 1940. After interviewing significant artists of the Harlem Renaissance for his master’s thesis, Tolson was inspired to write poetry exploring the African American urban experience. His poetry began appearing in African American newspapers such as the Washington, D.C. Tribune in the 1930s. Tolson’s first book of poetry, Rendezvous with America, was published in 1944.

After maintaining a successful teaching and coaching career at Wiley, Tolson accepted a position at Langston University in Langston, Oklahoma in 1947. During that same year, he was appointed the Poet Laureate of Liberia, which inspired his second poetry book. Published in 1953, Libretto for the Republic of Liberia, honored the centennial of Liberia’s founding. In addition to his professional work, Tolson served two consecutive terms as mayor of Langston, Oklahoma from 1954 to 1960. Tolson’s final poetry book, Harlem Gallery, published in 1965, helped establish him as a widely recognized modernist poet.

Melvin B. Tolson died after undergoing surgery for cancer on August 29, 1966. In the 1970s, Tolson’s poetry was displayed in an exhibit known as “A Gallery of Harlem Portraits” at the University of Virginia. More recently, actor and producer Denzel Washington captured Tolson’s work with Wiley College’s speech and the debate team in the 2007 film The Great Debaters.