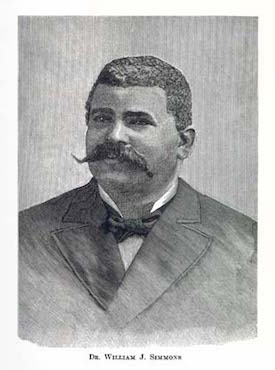 Born into slavery in Charleston, South Carolina on June 29, 1849, William J. Simmons served as the second president of what would later become Simmons College of Kentucky between 1880 and 1890. He was also a prominent historian and biographer of African American men.  Simmons’s parents were Edward and Esther Simmons.  When William was a child, he and his mother escaped to Bordentown, New Jersey.

William J. Simmons’ connection to the ministry began early.  According to the 1860 census, his mother resided in the home of a Methodist Episcopal minister, Abram Griffens, while William lived nearby in the home of an African American bootmaker.  Simmons also briefly worked as an apprentice to a dentist.  Toward the end of the Civil War, he served for a time with the Union Army.  After the war, Simmons attended several schools and colleges before graduating from Howard University in 1873.  Simmons then taught school in Washington, D.C., and Florida.

In 1879, Simmons assumed his first pastorate at the First Baptist Church in Lexington, Kentucky. One year later, he was named president of the Normal and Theological Institute in Louisville.  Like many black colleges during the late nineteenth century, the institution Simmons led emphasized religious studies, vocational education, and racial pride for its students.  Simmons died on October 30, 1890 in his tenth year as president of the Normal and Theological Institute.  In 1918, twenty-eight years after his death in 1890, the Baptist trustees renamed the institution Simmons College of Kentucky as a tribute to his leadership.

Simmons and his wife, the former Josephine A. Silence, raised seven children. Despite her deceased husband’s prominence, Josephine Silence Simmons was forced to work as a washerwoman for the U.S. government to support her family.  Their eldest daughters, Josephine and Effie, also worked as seamstresses. By 1920, Effie followed in her father’s footsteps by becoming a school teacher.