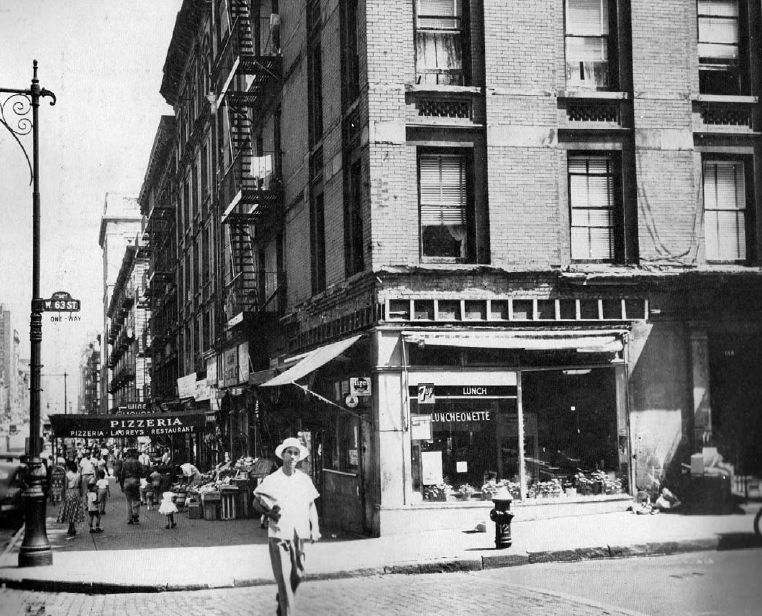 African Americans began a migration up the island of Manhattan in the early 1800s. Starting in Five Points, which is now New York City’s Chinatown, they moved in succession to Washington Street on the Lower West Side, then the Tenderloin in the West 20s and 30s, until the late 1890s when they had arrived at 16 acres of the Upper West Side called San Juan Hill.

With 59th Street as the southern border and Amsterdam Avenue as the eastern border, West End Avenue on the western fringe and 63rd Street to the north, the small district was packed with tenements and factories. The neighborhood held approximately 5,000 inhabitants, far more than filled the ramshackle wood and brick dwellings of the old Five Points neighborhood. Just to the south of 59th Street lay notorious Hell’s Kitchen dominated by Irish immigrants who competed with San Juan Hill’s residents for low-wage jobs and whose young men were the chief rivals of black teenagers in gang wars.

The origins of the neighborhood’s name “San Juan Hill” are unknown. The name may have derived from the black Spanish-American War veterans who acquitted themselves with valor alongside New York Governor and future President Theodore “Teddy” Roosevelt and his Rough Riders in Cuba. Whatever the origin of the neighborhood’s name, it was always a gritty slum which by 1900 had a reputation for gang violence.

San Juan Hill also left its cultural mark on the city fashioning a lively basement club culture as musicians performed for local residents and those who ventured into the area from outside. One of its most prominent residents, James P. Johnson, was an influential pianist who bridged the ragtime and jazz eras in New York. His family moved from New Jersey to San Juan Hill in 1908. There he recorded the “Charleston” and “If I Could Be With You (One Hour Tonight).” Johnson mentored Thomas Wright “Fats” Waller and other “stride piano players” who often worked the small clubs in the neighborhood as well as more prominent venues in Harlem.

The next generation of San Juan Hill musicians included most prominently Thelonious Monk. Although Monk was born in North Carolina in 1917, by the time he was five, his family had moved to the San Juan Hill neighborhood where eventually he met James P. Johnson and other San Juan Hill musicians. Thelonious Monk would become one of the most prominent jazz musicians in the nation. Next to Duke Ellington, he composed and recorded more jazz standards than any other musician in the early 20th Century including “‘Round Midnight,” “Blue Monk,” and “Straight, No Chaser.” Monk was credited with developing the bebop jazz style of the late 1940s.

By the 1940s, San Juan Hill had lost most of its black residents. Puerto Ricans replaced them as most African Americans moved north to Harlem. The Housing Act of 1949 allowed the City of New York to take possession of the area. Then real estate developer Robert Moses demolished the tenements and constructed the Lincoln Center as New York’s showcase for haute couture. The Metropolitan Opera, the New York Philharmonic Orchestra, and the New York City Ballet all moved into the former San Juan Hill neighborhood creating one of the earliest examples of what is now generally known as gentrification.