EWF was an outgrowth of an earlier band, Salty Peppers, formed in 1968 in Chicago, Illinois by Maurice White. In 1969 White moved to Los Angeles, California and added new members including his brother Verdine, Donny Hathaway, and Sherry Scott.

White changed the band’s name to Earth, Wind & Fire in 1970, following his astrological sign, Sagittarius. The band was then expanded to include Michael Beal, Chester Washington, Leslie Drayton, and Alex Thomas.

EWF’s first album (self-titled), was released in February 1971 on the Warner Bros. label. The album charted at No. 24 of Billboard’s Top Soul Albums. In April 1971, the band released the soundtrack from the film Sweet Sweetback’s Baadasssss Song, which reached No. 13 on Billboard Top R&B Album chart. EWF also released their The Need of Love album in November, 1971.

The band was reconstituted in 1972 to include Phillip Bailey and switched to record producer Clive Davis’s label, Columbia Records. Davis was so impressed with the band that he bought out their contract from Warner Bros.

Throughout the rest of the 1970s Earth, Wind & Fire produced a string of hits. Their album Head to the Sky was released in May 1973 and rose to No. 27 on Billboard’s 200. In 1974, the band collaborated with Ramsey Lewis on his album Sun Goddess that reached No. 1 on the Billboard Top Soul Albums. That’s the Way of the World was released March 1975 and rose to No. 1 on Billboard. The lead single “Shining Star” hit the top of both the R&B and pop charts. That album also contained Phillip Bailey’s signature ballad, “Reason.” EWF then released the double-LP set Gratitude, which contained the hits “Sing a Song” and the ballad “Can’t Hide Love.” They released The Best of Earth, Wind & Fire, Vol. 1 in 1977 that contained the single “September” and in 1979 they collaborated with the Emotions for the hit singles “Boogie Wonderland” and “After the Love Has Gone.” In 1981 they released Let’s Groove and in 1983, Powerhouse. 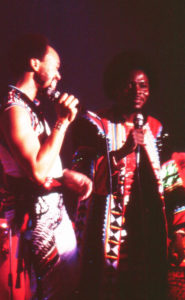 EWF are the recipients of six Grammys and four American Music Awards. In 1994 they were given an NAACP Image Award and in 1995 they earned a star on the Hollywood Walk of Fame. In 2000 they were inducted into the Rock and Roll Hall of Fame. The band has record sales of over 90 million and received the BET Lifetime Achievement Award (2002), the Grammy Lifetime Achievement Award (2016), and the Kennedy Center Honors (2019).