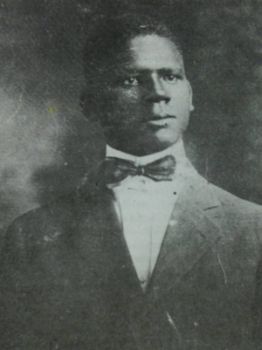 Claudius W. Rice was a political activist and labor leader in Houston, Texas from the 1920s through the 1940s.  He was the owner of Negro Labor News, president of the Texas Negro Business Association, and advocate of Booker T. Washington and the Tuskegee philosophy of self help.

Rice was born in 1897 to Mary and Ezekiel Rice in Haywood County, Tennessee. Formally educated in the rural schools of Haywood County, in 1909 he moved to the city of  Jackson, Tennessee and worked as a domestic servant while enrolled in the Lane College high school department.

Rice then moved to Houston, Texas, and by 1914 was giving lectures to local blacks about their patriotic duty to support the United States if it entered World War I.  Rice’s patriotic fervor lessened however after touring the Deep South and witnessing firsthand the racial discrimination African Americans faced.  He then began his quest to eliminate discrimination and racism.

While in Houston, Rice became an entrepreneur, using his position to rally local blacks into challenging discrimination and focusing attention on the unfair treatment of the region’s black workforce. He stirred controversy within the black and white Houston communities in his encouragement for blacks to “organize in a solid bloc” and use racial solidarity as an effective weapon to challenge their plight.

By World War II, Rice became an advocate of the Double Victory campaign. In his speeches he called for a “two front war,” hoping to increase black patriotism and white respect for African Americans by urging their support of the war effort.  He also called on Houston business owners to improve working conditions for working class blacks in the city.

Throughout his career Rice argued for racial unity. His avowed social and political conservatism and his insistence distancing himself and openly criticizing other black Houston leaders cost him the support of some of his potential followers and curtailed his effectiveness as a spokesperson for Houston’s African Americans.