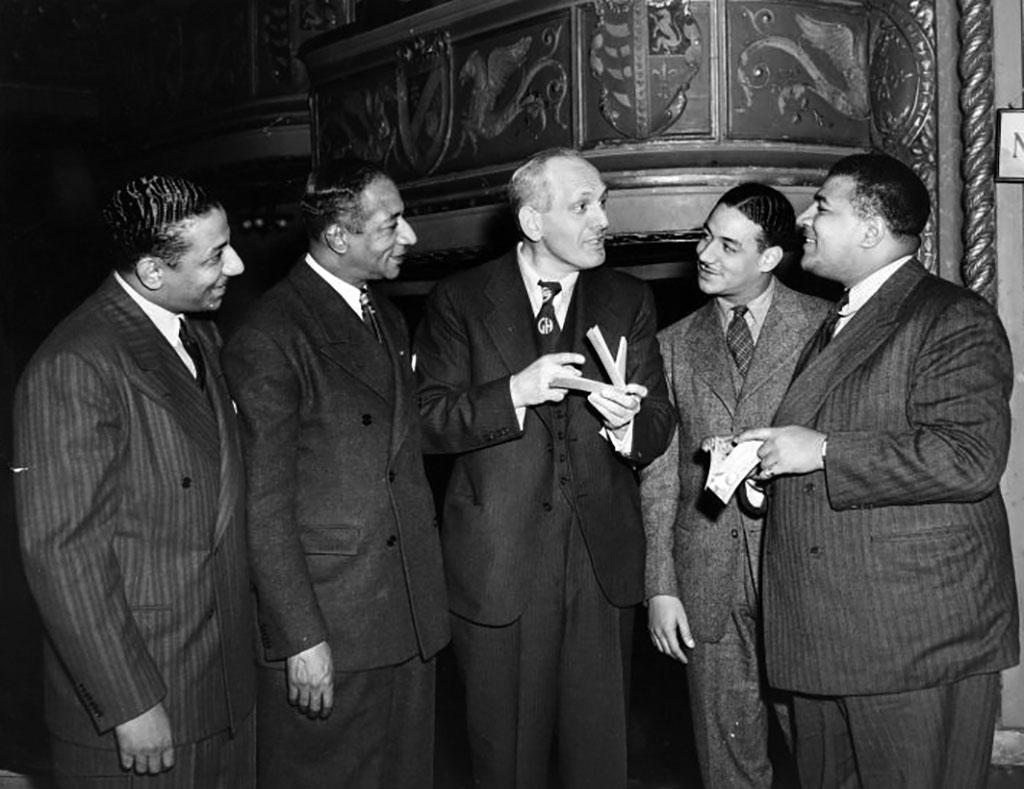 The Mills Brothers, a musical quartet, originally featured John Jr. (b. 1910), Herbert (b. 1912), Harry (b. 1913), and Donald Mills (b. 1915).  Born in Piqua, Ohio, the Mills Brothers lived with their father John Hutchinson Mills, a barber, and their mother, Eathel Harrington. As children, the Mills Brothers sang at local churches. For extra money, they also sang on street corners and at May’s Opera House, a local movie theater, between films. During these performances, the Mills Brothers began to develop their distinctive sound, which would later influence other doo-wop and rhythm and blues performers.  While singing four-part harmonies, John Jr. played guitar and the brothers imitated the instruments of an orchestra, such as the saxophone, trumpet, and tuba.

In 1925, WLW radio hired the brothers and the family moved to Cincinnati.  The quartet performed under different names including the Steamboat Four, the Tasty Yeast Jesters, Four Boys and a Guitar, and the Mills Brothers.  In 1929, the Mills Brothers auditioned for CBS radio in New York City. CBS signed them to a three-year contract and gave them their own network show, a first for African Americans on the radio.

In 1931, the Mills Brothers recorded their first album and their song “Tiger Rag” became a national hit. One of the first African American musical groups to receive mainstream popularity, the group’s success continued with “Goodbye Blues,” “Paradise,” and “Sweet Lucy Brown” among others. In Hollywood, the Mills Brothers made several films, including The Big Broadcast (1932) starring Bing Crosby, Twenty Million Sweethearts (1934), Broadway Gondolier (1935), Reveille with Beverly (1939), and Chatterbox (1943).

In 1936, John Jr. died of pneumonia and their father John Sr. replaced him in the quartet. In 1943, “Paper Doll” sold six million copies and spent twelve weeks at number one on the pop charts. The Mills Brothers recorded hits for Decca into the 1950s.

In 1954, John Sr. left the group. As a trio, the Mills Brothers recorded for Dot Records and toured around the country. They appeared as musical guests on The Jack Benny Show, the Perry Como Show, The Tonight Show, and Hollywood Palace. The Mills Brothers had their last hit with “Cab Driver” in 1968.

At the Dorothy Chandler Pavilion in Los Angeles, Bing Crosby hosted a celebration of the Mills Brothers’ 50-year career in 1975. The trio stopped performing together when Harry died in 1982.   Herbert died in 1989.  Piqua, Ohio dedicated a monument to the Mills Brothers on the town’s public square in 1990 and the group received a Grammy for Lifetime Achievement in 1998. Until Donald’s death in 1999, Donald and his son John continued to perform under the Mills Brothers name.