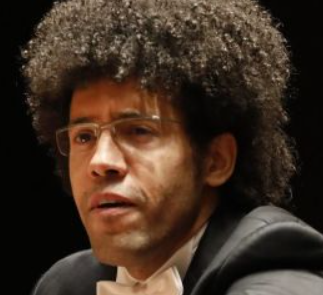 Payare graduated from the publicly funded El Systema, an esteemed Venezuelan education program offered to talented youngsters of all economic backgrounds. Payare, who assembled a brass quintet, began mastering conducting in 1999 under José Antonio Abreu after Abreu noticed Payare directing the quintet. Abreu, El Systema’s founder, was an instructor of one of the world’s best-known symphony conductors: Gustavo Dudamel, currently music director of the Los Angeles Philharmonic. Just one year older than Dudamel, Payare’s own energetic directing style would be compared to that of Abreu’s other exceptional student.

Payare first major career move was to earn the position of principal horn player of his nation’s Simón Bolívar Orchestra. Upon winning the Nicolai Malko Competition for Young Conductors in 2012 he was appointed assistant conductor of the orchestra, directed by to Claudio Abbado, and occupied the equivalent post at Staatsoper Berlin (Berlin State Opera) in Berlin, Germany led by Daniel Barenboim. In the wake of the Malko triumph, Payare took advantage of a conducting fellowship at Tanglewood Music Center in Boston, Massachusetts and was picked one of the four Dudamel conducting fellows at the Los Angeles Philharmonic. He participated in in numerous prestigious tours and recording sessions with such distinguished conductors as the late Lorin Maazel, Sir Simon Rattle for the Birmingham (England) Symphony Orchestra, and Giuseppe Sinopoli of Staatskapelle Dresden (Dresden State Orchestra), Germany.

In 2013, Payare made his first appearance with the Ulster Orchestra and so impressed Irish audiences that he was soon brought back in 2014 as its chief conductor, replacing JoAnn Falletta, its first female conductor. In 2016 his contract was extended for an additional three years.

A guest appearance with the San Diego Symphony in 2018 lead to his being selected music director/conductor starting the 2019-2020 season. Payare was married to accomplished cellist Alisa Weilerstein in 2013. They have a daughter, Ariadna.