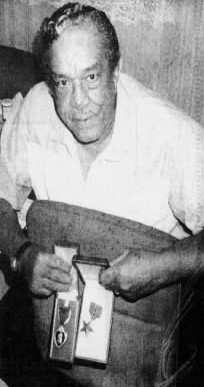 Though overshadowed by and having received far less publicity than fabled Pearl Harbor hero Dorie Miller, Alonzo Alexander Swann Jr. performed similar action in the Pacific Theater and his all-black Navy gun crew. Their brave accomplishment and awful sacrifice would have gone relatively unnoticed had it not been for the efforts over nearly half a century of Petty Officer Swann to bring attention to their heroism.

Born September 21, 1925 in Steelton, Pennsylvania, one of the five children of Alonzo Sr. and Mary Swann, Alonzo began service in the Navy at age 18 in 1943. In the racially segregated Navy of World War II African Americans were confined to lower ranks as mess hall cooks and waiters. Blacks could, however, volunteer to operate vessel guns in defense of their ship. This allowed Swann, whose rank was Steward’s Mate First Class, and his crew of twenty seamen to abandon their usual posts on the aircraft carrier USS Intrepid and rush to their battle station, Gun Tub 10.

On October 29, 1944 during the Battle of Leyte Gulf in the Philippines, they faced a Japanese kamikaze aircraft moments away from crashing on the carrier’s deck and thereby making it impossible to launch the carrier’s planes. It soon became apparent that the Japanese plane had not received sufficient damage from carrier’s 20-millimeter cannon fire to stop it. Terrified, the other gun crews scattered but the black gunners of Gun Tub 10 remained, firing defiantly and accurately at the suicidal kamikaze, blasting off a wing and shredding its tail. A split second later it smashed directly into their position. The resulting inferno caused by ignited gasoline and exploding ammunition killed nine and injured six gunners. Ignoring serious burns to his legs and chest, Swann tended to the severely wounded including a friend who begged him to commit a mercy killing to end his suffering.

Swann was haunted by that horrific event and grew increasingly incensed when his captain promised him and other surviving black gunners the Navy Cross, the Navy’s highest award for bravery in battle. Instead they were given Bronze Stars or lesser recognitions. Over the next half-century he wrote and phoned politicians to recount his war story and complain to anyone he thought might help to right this grievance.

Finally, in 1991 Swann filed a lawsuit in federal court. U.S. District Judge Rudy Lozano ruled in 1993 that Swann had been denied the Navy Cross due to an “error of intentional racial injustice” and ordered the Secretary of the Navy to grant the honor that had eluded him for decades. In a ceremony aboard the USS Intrepid later that year he received the Navy Cross.

After his service in the war Swann earned a degree in political science at Pennsylvania State University and worked as General Director of the Gary (Indiana) Sanitary District and also co-owned a nightclub. He died in Gary on January 30, 2007, survived by his wife, Gussie Swann, and nine of his ten children.