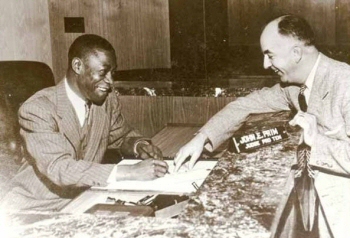 John Edmondson Prim was the first African American to serve as deputy prosecuting attorney for King County and the first African American judge in the State of Washington. He was born to Charles and Sara Prim in Nashville, Tennessee on September 15, 1898. In 1904, the family moved to Seattle where Charles Prim found employment as a longshoreman. John Prim was educated in Seattle Public Schools and graduated in 1918 from Franklin High School where he was active in sports and the debate team.

After working his way through the University of Washington as a waiter at the Butler Hotel in Seattle, he received his Bachelor of Laws Degree in 1927, and was admitted to the bar the same year. While at the university, he lettered in baseball and also played football. He played part of the Washington-Dartmouth football game on November 27, 1920, which dedicated the University stadium.

Prim had a private law practice from 1927 until 1943, when he assumed the responsibilities of his first full time public office as deputy prosecutor of King County. He returned to private practice in 1951. Then, in 1954 he was appointed by Mayor Allan Pomeroy as judge pro tem of Seattle Municipal Court. He served on the Mayor’s welcoming committee when Ethiopian Emperor Haile Selasse visited Seattle on June 11, 1954.

Judge Prim served as precinct committeeman and as a member of King County Democratic Central Committee. He was a founder of the Seattle Urban League and was the first African American member of the State Board of Prisons and Parole.