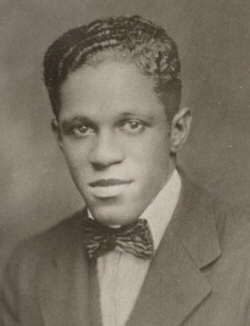 Fredrick Douglass “Fritz” Pollard, born in 1894, was raised in Chicago, Illinois. In high school he was an all-around athlete, excelling as a running back, a three-time Cook County track champion, and a talented baseball player. Upon graduation, for a short time, he played football for Harvard, Northwestern, and Dartmouth before receiving a scholarship from the Rockefeller family to play for Brown University in 1915.

Pollard led Brown University to the 1916 Rose Bowl. The 5’9″, 165-pound back was the first African American to play in this prestigious game and the second to receive All-American honors in college football.  Once Pollard left Brown, he momentarily pursued a degree in dentistry, worked as a director for an Army YMCA, and coached football at Lincoln University. He later signed to play for the Akron (Ohio) Pros in the American Professional Football League (APFA) in 1919, following army service during World War I. In 1920, the Pros joined the newly founded American Professional Football Association, which later became the National Football League (NFL). 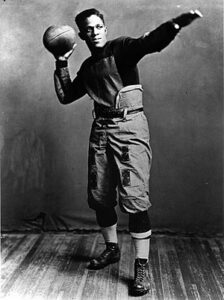 As a professional player, Pollard immediately earned a place in pro football history as one of only two African Americans in the new league. Football experts indicate that Pollard was the most feared running back in the game.  Fritz Pollard led Akron to a championship in 1920. One year later, he became the first African American head coach in NFL history. He coached Akron until 1926 and went on to coach for NFL teams in Indiana and Milwaukee, Wisconsin. 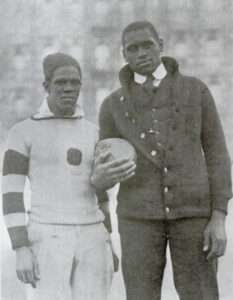 In 1928, Pollard organized and coached an all-African American professional football team called the Chicago Black Hawks. The team played against white teams around Chicago but experienced most of their success by scheduling exhibition games against teams on the West Coast during the winter months.