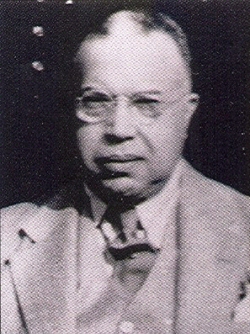 Vertner Woodson Tandy, one of seven founders of Alpha Phi Alpha Fraternity, Incorporated, was born on May 17, 1885, in Lexington, Kentucky to Henry A. Tandy, a successful entrepreneur and building contractor, and Emma Brice Tandy. Young Tandy was educated at the Candler School in Lexington. He gained an understanding of construction by watching his father build and develop homes in Lexington. Born enslaved, Henry Tandy established the construction firm, Byrd and Tandy. Among their projects were the Lexington Opera House and the Fayette County Courthouse, now the site of the Lexington Visitors Center. These early experiences with his father led Vertner Tandy to develop an interest in architecture.

In 1904, 19-year-old Tandy entered Tuskegee Institute to study architecture and during his short stay he was under the guidance of Booker T. Washington. Tandy became the Tuskegee architecture program’s “prize” student but a year later, in September of 1905, he transferred to Cornell University in Ithaca, New York. Henry Arthur Callis recalled that Tandy showed up on the hallowed grounds of Cornell in a rather “tight cadet’s uniform with a saxophone under his arm.” Tandy, Callis and a small group of college men formed Alpha Phi Alpha Society in the spring of 1906, which would eventually become Alpha Phi Alpha Fraternity, the first African American Greek letter fraternity on December 4th of the same year. During his time in the fraternity, Tandy was treasurer, designer of the pin, and eventually was responsible for its incorporation.

Upon graduation, Vertner W. Tandy became the first African American registered architect in the State of New York. His office on Broadway in New York City would be the home of Tandy and Foster, his architectural firm. Among the buildings designed by the highly gifted architect are Saint Phillips Episcopal Church in New York City and the Ivy Delph Apartments which in 2005 were listed on the National Register of Historic Places. His most famous commission was Villa Lewaro, the mansion of Harlem businesswoman Madam C.J. Walker, in Irvington-on-Hudson, New York. Villa Lewaro, completed in 1918, was a 34 room, 20,000 square-foot mansion, completed at a cost of $250,000.

Vertner W. Tandy became the first African American to pass the military commissioning examination in World War I. After undergoing officer training at Fort Des Moines in Iowa, he was subsequently commissioned First Lieutenant in the 15th Infantry of the New York State National Guard. Upon his release from military service Tandy would return to practicing architecture in New York City for the next three decades. He died on November 7, 1949 of pneumonia in New York City at the age of 64.