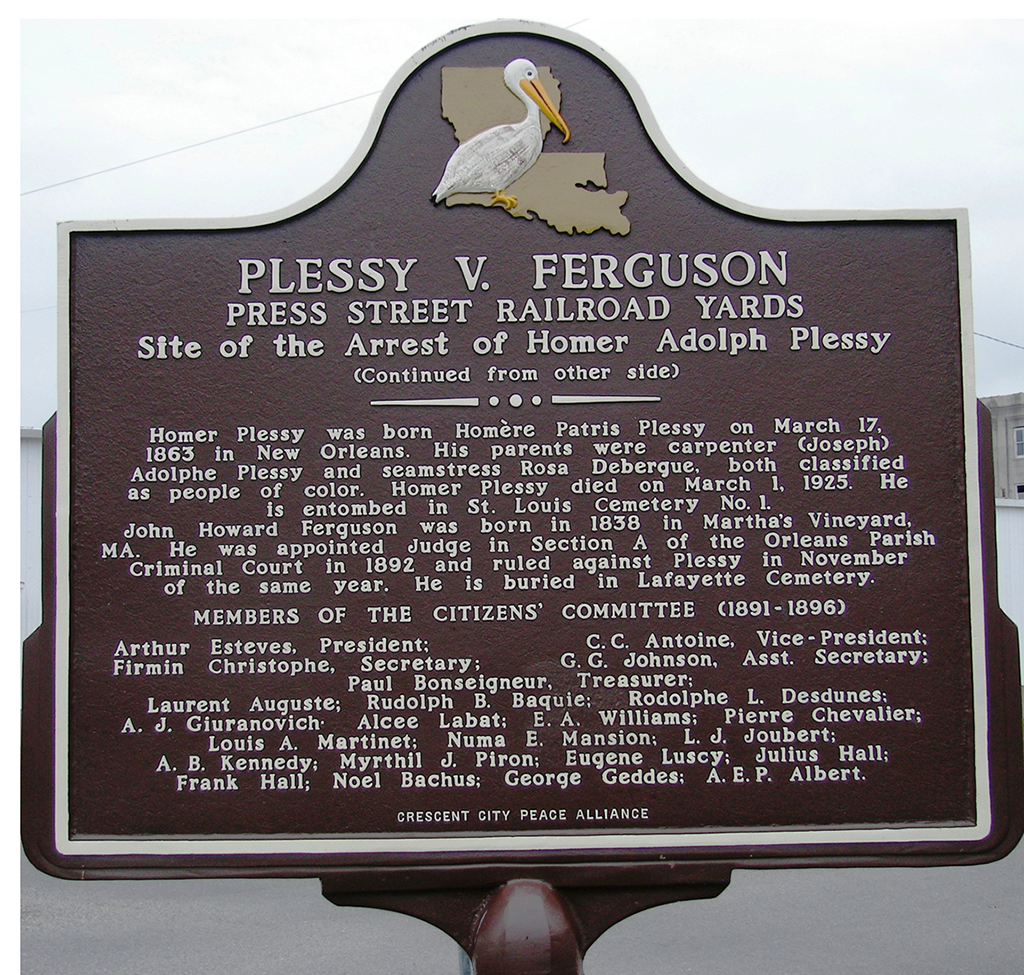 Plaintiff for a landmark Supreme Court case, Homer A. Plessy was born on March 17, 1863 in New Orleans. He was a light-skinned Creole of Color during the post-reconstruction years. With the aid of the Comité des Citoyens, a black organization in New Orleans, Homer Plessy became the plaintiff in the famous Plessy v. Ferguson case decided by the US Supreme Court in May 1896. The decision established the “separate but equal” policy that made racial segregation constitutional for the next six decades.

In order to challenge the 1890 Louisiana statute requiring separate accommodations for whites and blacks, Homer Plessy and the Comité des Citoyens used Plessy’s light skin to their advantage. On June 7, 1892 Plessy bought a first class ticket on the East Louisiana Railway. He took a vacant seat in a coach reserved for white passengers. When Plessy was ordered to leave, he disobeyed. Policemen arrived and threw Plessy off the train and arrested him and threw him into jail. He was charged with violating the Louisiana segregation statute of 1890.

Contending that the law violated the Thirteenth and Fourteenth Amendments, Plessy petitioned a writ of prohibition to the Louisiana state Supreme Court against Judge John H. Ferguson. The state Supreme Court denied Plessy, holding that the law was constitutional, but allowed his writ of error to the US Supreme Court. Lawyers A.W. Tourgée and S.F. Phillips represented Plessy. His argument to the Supreme Court was that as a citizen of the United States, a resident of Louisiana and of mixed descent, with unrecognizable “colored blood,” he deserved the rights and privileges secured to white people by the Constitution.

Justice Henry Brown delivered the majority decision of the court, holding that the Louisiana law did not violate the Thirteenth and Fourteenth Amendments because it did not deprive liberties or properties without due process of the laws. Justice John Marshall Harlan issued the lone dissent, stating that the separation of citizens on the basis of race went against the civil freedoms granted in the Constitution and the Civil Rights amendments. Ultimately, the Plessy decision only opened the door for more segregation laws, which were also called the Jim Crow Laws.  In 1954, 58 years later, the Brown v. Board of Education decision overruled the “separate but equal” doctrine.

Homer A. Plessy, an insurance agent into his early sixties, died on March 1, 1925 in New Orleans.