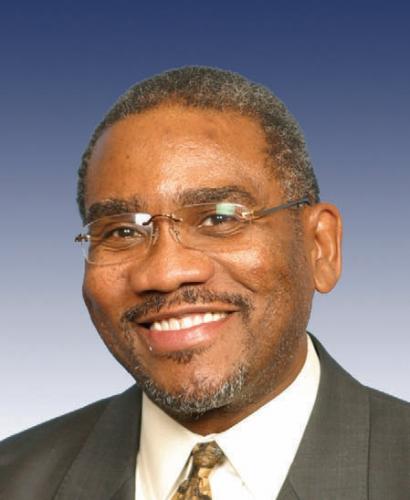 U.S. Congressman Gregory W. Meeks was born on September 25, 1953 in East Harlem, New York City. He was raised in a public housing project in East Harlem and received his Bachelor of Arts degree in History with a minor in Political Science from New York’s Adelphi University. He earned his Juris Doctorate in 1978 from Howard University School of Law, Washington, D.C.

After graduating, Meeks joined the Queens County District office, worked for the Office of the Special Narcotics Prosecutor for the City of New York, then for the State Investigation Commission, and eventually was appointed Supervising Judge of the New York State Worker’s Compensation System. He won his first public office when he was elected to the New York State Assembly where he served from 1992 to 1997.

Through a special election to fill the vacancy created by U.S. Representative Floyd H. Flake’s resignation, Meeks was elected as a Democrat to the One Hundred Fifth Congress in 1998 and currently represents New York’s Sixth District (part of the Queens Borough) in the House of Representatives. He is a member of the House Committee on Financial Services, a member of the Committee on Foreign Affairs, and of the Congressional Black Caucus. During his tenure, Meeks has gained the reputation of what the New York Daily News called being “at the forefront of a generational shift in the city’s black political leadership.”

Meeks has a consistently liberal voting record, supporting abortion rights, gay marriage, and affirmative action. As Congress debated policy issues such as transportation, trade, and telecommunications, Meeks sought to ensure through his position as Chair of the Congressional Black Caucus’s New Market’s Initiative, that the voices of minority consumers were heard. He is an advocate for working class families, seeking to strengthen workplace protection laws and encouraging the creation of livable wage-paying jobs.

In 1999 he also helped create thousands of new jobs by helping a new airline, JetBlue, gain regulatory approval. For this effort and others related to aviation legislation, Meeks received the JFK Chamber of Commerce award in 2002.

He is a member of the National Association for the Advancement of Colored People (NAACP), the Coalition of 100 Black Men, and the United Black Men of Queens, among other organizations. Various awards won by Meeks have included the Information Technology Industry Council’s 2005 “Legislator of the Year” award, and the Urban League’s 2006 “Congressional Leadership Award.” He was also named by the New York Roadway Coalition as its 2006 “Legislator of the Year.”

Congressman Meeks, a member of Alpha Phi Alpha Fraternity, lives with his wife Simone-Marie and their three daughters in Queens, New York.