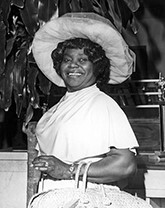 Dr. Vera Mae (Berry) Pigee was a significant civil rights organizer and activist in the Mississippi Delta. She a co-founder of the Council of Federated Organizations and participated in a demonstration that ultimately desegregated the Greyhound bus terminal in Clarksdale, Mississippi.

Vera Mae Berry was born September 2, 1924, to the union of Wilder Berry, a barber and tailor, and Lucy Wright Berry, a domestic worker who also raised livestock in Leflore County, Mississippi. When her father deserted the family, her mother moved and raised Vera and her brother, Paul, in Tutwiler in Tallahatchie County, Mississippi. At the age of 14, Vera Mae Berry married Paul Pigee Jr., who was 18. She gave birth to their daughter, Mary Jane, on September 1, 1940.

In 1953, Pigee helped charter the NAACP branch in Coahoma County. Later she traveled to Chicago to study cosmetology but returned to Clarksdale where she opened Pigee’s Beauty Salon in 1955. She resumed her activism and became secretary of the Coahoma County NAACP, a position she held for nearly twenty years.

In 1959, the Coahoma County NAACP Youth Council was chartered with Pigee as the advisor and her daughter Mary Jane as its first president. Two years later, on August 23, 1961, members of the Youth Council participated in the demonstration at the Illinois Central train terminal. Under Pigee’s leadership, three students, Adrian Beard (a 16-year-old at Immaculate Conception Catholic School), Wilma Jones (a 14-year-old at Higgins High School), and Mary Jane Pigee (Vera Mae’s 18-year-old daughter attending Central State College), challenged Mississippi’s segregated waiting rooms law.  They attempted to purchase a ticket from the “white” side of the counter. When the ticket agent refused to sell the tickets, the activists also refused to vacate the terminal. The police arrived and arrested themfor violating Mississippi’s segregation law. These actions inititiated the civil rights movement in Clarksdale.

Undeterred, in the fall of 1961, Vera Mae Pigee and another member of the chapter, Idessa Johnson, went to the whites-only section of Clarksdale Greyhound Bus terminal to stage a protest and challenge the segregation law. This time they were not arrested. In December 1961, when Pigee and her daughter entered the whites-only terminal waiting area, they were harassed by the Clarksdale police. They filed a complaint with the U.S. Justice Department, the Interstate Commerce Commission, and the Federal Bureau of Investigation. The incident sparked additional protests against the bus terminal and the police department. Those protests forced the Greyhound terminal to end its segregation policy on December 27, 1961.

Pigee continued her civil rights activism by helping to establish the Council of Federated Organizations (COFO), a coalition of civil rights organizations throughout Mississippi that  challenged segregation and discrimination between 1962 and 1965. COFO is best known for  initiating the Freedom Summer Project in 1964. Pigee taught at the Freedom Schools and provided food, shelter, and meeting space for activists, allowing them to use both her home and beauty shop.

In the 1970s, Vera Mae Pigee moved to Detroit, Michigan, where she studied sociology and journalism at Wayne State University. She continued speaking about her experiences in the Mississippi Civil Rights Movement and in 1975 published a two-part autobiography, Struggle of Struggles. On December 14, 1985, she was awarded an honorary Doctor of Humanities from Urban Bible College of Detroit, in recognition of her work in the field of civil rights. She later became an ordained Baptist minister and continued working with the NAACP. Dr. Vera Mae Pigee passed away in Detroit on September 18, 2007, at the age of 83.