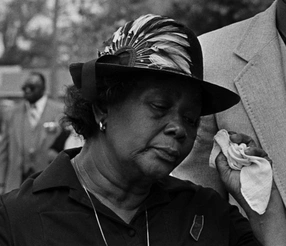 Beulah Mae (Gregory) Donald is best known for filing a civil lawsuit against the United Klans of America after Donald’s youngest child Michael Donald was found hanging from a tree in Mobile, Alabama on March 21, 1981. Henry Hays (26 years old at the time) and James Knowles (17 at the time), members of the United Klans of America, were the individuals arrested for the murder. Following the murder of her son, Michael, Beulah Mae Donald contacted the Southern Poverty Law Center in Montgomery, Alabama and proceeded with an unprecedented lawsuit that would later establish a foundation for filing civil suits for damages involving hate groups and hate crimes committed.

Beulah Mae Gregory was born on October 20, 1919, to Mary Hollman Gregory, a laundress in Mobile, Alabama. Beulah Mae was the youngest in her family. After getting pregnant with her first child in the 10th grade, she stopped attending school to work. On April 15, 1936, 16-year-old Beulah Mae Gregory married William Miller.

Michael Donald, born July 24, 1961 in Mobile, was the youngest child of Beulah Mae from her second marriage with David Donald. The marriage quickly ended, and she moved her family into a Mobile housing project, where she raised them as a single mother. Michael grew up in Mobile, attended Carver State Technical College, and worked at the Mobile Press Register.

On March 21, 1981, 19-year-old Michael Donald was walking home from his sister’s residence when members of the United Klan lured him to their vehicle and kidnapped him. They searched for a black man to kill after a jury failed to convict a black man who had killed a white, Birmingham police officer during an armed robbery. The Klansmen drove to a remote spot; they beat Donald, hung him from a tree, and slit his throat.

Initially, the Mobile police advanced the theory that Donald’s murder was the result of a drug deal gone wrong, but Beulah Mae Donald contended that her son was not involved with drugs. She pressured the Mobile police to continue investigating. Meanwhile, a growing number of supporters began demonstrations in downtown Mobile in the summer of 1981. In 1983, two Klansmen, Henry Hays and James Knowles, were arrested. Hays was convicted of the murder of Michael Donald by a jury consisting of 11 whites and one black person. Hays received the death penalty and was executed in 1997. Knowles, however, pleaded guilty and escaped the death penalty in exchange for his testimony against Hays; he was sentenced to life in prison.

With the support of the Southern Poverty Law Center, Donald filed a wrongful death lawsuit against the United Klans of America in 1984. Donald’s attorney argued that the organization should be held responsible for the actions of its members. In February 1986 an all-white jury in Mobile returned a verdict awarding Donald $7 million dollars. The judgment forced the bankruptcy of the United Klans of America, and in May of 1986, the terrorist organization turned over the deed to their national headquarters building in Tuscaloosa, Alabama, to Donald along with other property. Her lawsuit set a precedent for other legal actions against violent white supremacist organizations. Beulah Mae Donald remained in Mobile Alabama until she died on September 17, 1988 of natural causes at a Mobile hospital. She was 69 years old.