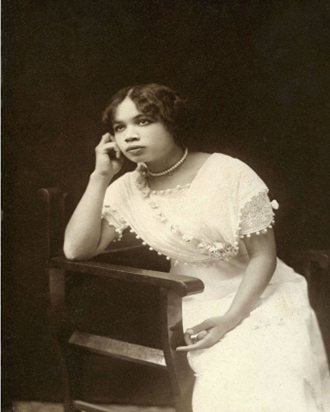 While scholars debate the first Power Couple of the 20th Century who were African American, Richard Selcer, a historian of the Fort Worth, Texas region, makes the case for the little-known couple, Manet and Stephen Fowler, of Fort Worth and New York City. See his case below:

The term “power couple” is a modern invention to describe couples either married or romantically linked where each is accomplished in their own right. It has been applied to Barack and Michelle Obama and retroactively to Franklin and Eleanor Roosevelt among others. But no one is more deserving of the title than Manet Harrison and Stephen Fowler, arguably the 20th century’s first Black power couple.

Both Harrison and Fowler were born and grew up in Fort Worth, Texas, a town not known for its Black population or its racial tolerance. She was born Minnia Helen Harrison on August 30, 1895, changing her given name to “Manette” (or “Manet”) while still a young woman. He was born on May 6, 1881. Both were products of the segregated Fort Worth school system which before 1910 ended for Black students with primary education. Yet both attended college, she to Tuskegee Agricultural and Normal School (Alabama) where she knew George Washington Carver and Booker T. Washington and he to Prairie View Normal and Industrial College (Texas) Although their specific graduation dates are unknown, after graduation both returned to Fort Worth and Fowler joined the faculty of the Colored high school.

Manet Harrison was drawn to teaching. She was a child prodigy who gave piano recitals at the age of six. She graduated from Tuskegee with a degree in “domestic science” then joined the faculty at Prairie View where she put her true talents to work teaching music. However, Fort Worth drew her back to teach in the public schools.

It was a love of music and church that brought them together. Both were members of Mount Gilead Baptist Church, Fort Worth’s oldest Black church. He was on staff teaching Bible classes, and she was the director of the choir and the organist. In 1915 they married in a church wedding that was one of the biggest social events of the year in Fort Worth’s Black community which numbered approximately 10,000 at that time or about 9% of the city’s population. In the next ten years they would have five children (2 girls and 3 boys) who were raised to value education and make their way in the professional world.

It was as professionals that Stephen and Manet Flower made their mark. Within two years of hiring on with the Fort Worth public school system Manet was promoted to “director of music” for the three “negro schools.” She took her students to the larger community by putting on choral programs (“festivals”) of African American folk music. Stephen, after sixteen years teaching in the school system, resigned in 1919 to become the first “General Secretary” of the “Negro YMCA” of Fort Worth. Both were talented, ambitious, and entrepreneurial. Manet refused to be defined by conventional categories; she played the piano and pipe organ, sang, and painted.

Stephen Flower made the Negro YMCA a center of the Black community, setting up a trade school and employment “bureau” on site. On the side he led a male quartet that performed African American folk songs and spirituals for audiences both white and Black. It was only natural that they would collaborate. Their first joint effort was a pageant, “Up from Slavery,” which she wrote and they co-directed. A decade later they took another original pageant, “The Voice,” to Chicago, Illinois for the golden jubilee of the National Baptist Convention of America.

In 1926 Manet organized the Negro Music Institute of Fort Worth, out of which grew the Texas Association of Negro Musicians (TANM), a branch of the National Association of Negro Musicians (NANM). She was elected first president of the Texas branch and published the national magazine, The Negro Musician, out of Fort Worth. her self-appointed mission was to promote the education of young African Americans, using children’s natural love of music to get them interested in education in general and their African roots in particular. Stephen served on the Institute’s faculty.

In the summer of 1928, Manet Fowler brought the TANM to Fort Worth for a four-week course of study that she called “a Master School” that drew faculty from all over the state. Stephen was the school’s vice president and treasurer. It was so successful that the Fowlers brought it back the following summer, which was a busy one for Manet. She persuaded the national organization to hold their annual convention in Fort Worth. The week-long event drew some 1,300 people from all over the country and included a grand parade through downtown.

Somehow during these years, Manet Fowler found time to study voice at the Chicago Musical College and the American Conservatory of Music (Chicago), winning new plaudits as a “dramatic soprano.” After 1929, she was much more in demand as a singer than at the keyboard. In 1930 she gave a recital in Fort Worth that combined classical pieces, negro spirituals, and what the newspaper described as “genuine African melodies sung in native languages.”

Manet Fowler dreamed of transforming her Masters’ School into a year-round school teaching not just music but also African art and culture. (She personally disdained the term “negro” as demeaning.) Finally, in 1933 she realized her dream when she opened the Mwalimu School of Music and Creative Art in New York City. (The name is Swahili for “noble or distinguished teacher.”) As the home of the Harlem Renaissance, it was the perfect place. She had already formulated the “Mwalimu Creed,” a statement of personal growth that combined elements of Christian piety, 19th century naturalism, and self-improvement philosophy, promoting “the good, the true and the beautiful.” The school’s curriculum combined vocational with liberal arts with instruction in music, interpretive dance, “artistic photography,” African history, “elementary journalism,” and cosmetology.

The school’s public face was the Mwalimu Festival Chorus, which she directed. They sang in English, German, and Yoruba as well as other “African dialects,” and their repertoire included classical, contemporary, and even opera. The highlight of those concerts was what they called the African national anthem, “Nkosi Sikele U Afrika.” By mixing musical genres and styles she wanted to show the “Negro [sic] contributions to [world] culture,” as one newspaper put it. Within a year she had her students performing in some of New York’s finest concert halls and touring.

After Manet moved to New York in 1933, Stephen remained in Fort Worth working for the YMCA and through that organization for his own people. In 1932 what was now known as “the Colored Y” hosted the Negro State Teachers’ Association of Texas convention, requiring accommodations in private homes. Three years later he presided over the opening of an expanded “Colored YMCA” that was still more about social services than athletic activities. In 1938 he resigned and moved to Harlem to become “director” of the Mwalimu School. He and Manet also began performing together again in recitals where they both sang while she accompanied them on the piano.

The Fowlers spent their final years living in Manhattan. She performed, led the school, and served on the board of the NANM. She also launched a booking agency for Black musicians. Occasionally she came back to Fort Worth to visit family and keep in touch with her many admirers. In 1962 she attended the 50th anniversary of the Colored High School’s 1912 graduating class.

Stephen Fowler died on October 28, 1965 at the age of 84 while attending the Empire State Baptist Convention in Syracuse, New York. He was buried in New Jersey’s Rose Hill Cemetery. Back in Fort Worth his memory flickered briefly in 1989 when the school board was casting about for a name for a name for a new elementary school. One name suggested was that of Stephen H. Fowler, but trustees rejected it because the name was hardly a household word even in the Black community and “would promote little neighborhood identification with the school.”

Manet Fowler died in New York City on February 16, 1976 at the age of 80 and was buried with Stephen, literally in the same grave. She did not even rate an obituary in the Fort Worth Star-Telegram. Her hometown had forgotten her. Her papers eventually wound up at Yale and Emory universities.

A better indication of the Fowlers’ significance is not how many pages they rate in the history books but the recognition they received during their lifetimes. No other Black woman of the first half of the 20th century was covered more extensively in the nation’s newspapers, not Madam C.J. Walker and not Mary McLeod Bethune. She was an early proponent of Black nationalism and though a latecomer to the Harlem Renaissance, she contributed greatly to the acceptance of African American culture by the white mainstream. She was honored in 1972 at the same time as Duke Ellington and Ramsey Lewis by NANM. Stephen, too, quietly challenged the status quo in Fort Worth by his performing and transforming the local YMCA from a lily-white organization.

Together Manet and Stephen Fowler broke down walls and blazed a trail in education and the arts from Fort Worth to New York City. They brought the spirit of the Harlem Renaissance to Texas, and they deserve to be celebrated in the age of “Black Lives Matter.”