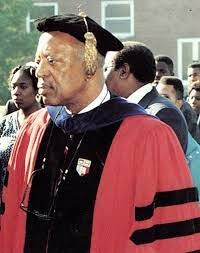 Prezell Russell Robinson, longtime President of St. Augustine’s College (later University) was born in Batesburg, South Carolina, on August 22, 1920, to Clarence Robinson and Annie Foulks Robinson. He is the eighth of nine children. Robinson’s early education began at Leesville Colored Primary School in Batesburg in 1926. However, he left the rural community and moved to Voorhees School and Junior College, 50 miles north, where he later graduated in 1940 with an Associate of Arts degree. Robinson then enlisted in the United States Army during World War II, serving from 1941 to 1943.

Upon being honorably being discharged from the Army, Robinson continued his education, receiving a Bachelor of Arts degree in economics and sociology from Saint Augustine’s College in 1946. One decade later he received the Master of Arts degree and the Doctor of Philosophy degree in 1956 from Cornell University in rural education and rural sociology. He later pursued postgraduate work at Harvard University, Pennsylvania State University, and the University of California, Berkeley.

Dr. Robinson returned to St. Augustine’s College in 1956 as a dean and sociology professor and ten years later in 1966, he became the 8th president of the college. He remained President for the next 29 years, retiring from the post in 1995. Dr. Robinson served as president of St. Augustine’s College longer than any other individual holding that post. During his tenure he increased student enrollment, brought new faculty to the campus, and oversaw the construction of new dormitories. In 1984, the Board of Trustees unanimously voted to name the main campus library the Prezell R. Robinson Library.

An academic strategist, fundraiser, and educational leader who promoted global freedom and social justice, Robinson was a Charles A. Mott Endowed Distinguished Professor of the Social Sciences and led the United Negro College Fund from 1978 to 1981. He also served the international community as Public Ambassador to the United Nations General Assembly. He was named to those posts by Presidents George H. W. Bush in 1992 and William Clinton in 1996, respectively. Dr. Robinson is a life member of Omega Psi Phi Fraternity, Inc. He pledged the Iota Iota Chapter (Raleigh) in 1947.

In the 1970s, while President of St. Augustine’s College, Robinson mentored Father Emmanuel Johnson, president, and helped him model Liberia’s Cuttington University after Saint Augustine’s University. For his efforts he received the Star of Africa Order for distinguished service to the Republic of Liberia.

In recognition of his many accomplishments for academic excellence, fundraising, and international lectures, Robinson received honorary doctorates from Columbia University, Cuttington University in Gbarnga, Liberia, North Carolina State University, Saint Augustine’s University, Saint Paul’s College, Shaw University, University of the South, and Voorhees College. In 2010, Robinson was inducted into the Raleigh, North Carolina Hall of Fame. He continues to be active as an Emeritus President of Saint Augustine’s University particularly in the service of the intellectual, social, and economic needs of the underserved African American community.