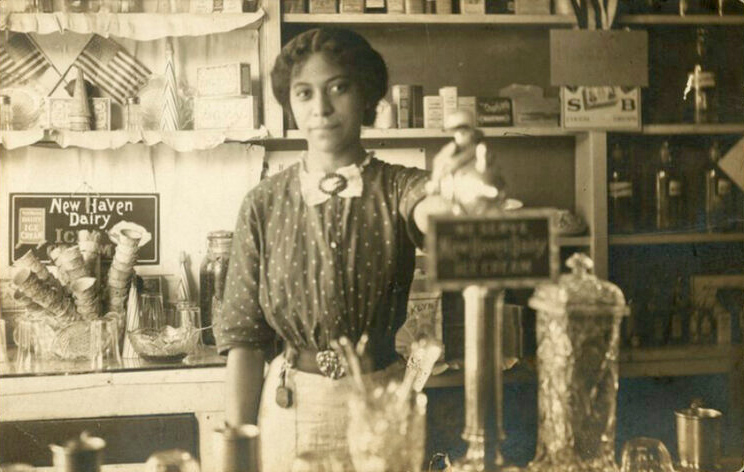 Pioneer pharmacist Anna Louise James was born Louise Clegget James on January 19, 1886, in Hartford, Connecticut. She was the eighth of eleven children born to Willis Samuel James, who was born enslaved and escaped at age sixteen through the Underground Railroad, and Anna Houston. Her mother died when she was eight years old, and her father moved the family to Old Saybrook, Connecticut, where he raised the children with the assistance of his eldest sister, Bertha James Lane, and her husband, Peter Clark Lane.

Anna James’s education continued at Hartford’s Arsenal Elementary School in 1902. In elementary school, she began showing an interest in the laws of natural science. That interest continued throughout her studies at Saybrook High School, where she excelled in mathematics and the natural sciences. After graduating from high school in 1905, she enrolled in the Brooklyn College of Pharmacy (now the Arnold and Marie Schwartz College of Pharmacy and Health Sciences). She was the only woman in the class and in 1908 becoming the first African American woman to graduate from that institution. By that point she began using the name “Anna Louise James.” In 1909, James became the first licensed pharmacist in Connecticut and one of the first African American women pharmacists in the United States.

James operated a drugstore in Hartford until 1911. She later worked as a pharmacist at the Lane Drug Store, assisting her brother-in-law Peter Lane, one of only two African American pharmacists in Connecticut during the late 19th and early 20th centuries. In 1917, Peter Lane joined the army after the United States entered World War I, and he turned over management of the drug store to Anna James.

After that transition, Lane Drug Store was renamed James Pharmacy, and it served the Hartford community effectively for more than 60 years. In 1967, Anna James retired and the pharmacy closed soon afterwards.

Anna James was altruistic, assisting the under-served with prescriptions especially during financially challenging times like the Great Depression. And with the passage of the 19th amendment to the United States Constitution in 1920, James became one of the first women to register to vote as a Republican. All of her adult life. James was a member of the Old Saybrook’s Presbyterian/Reformed First Church of Christ.

Anna Louise James died on December 12, 1977 in her Hartford, Connecticut apartment home at the age of 91.