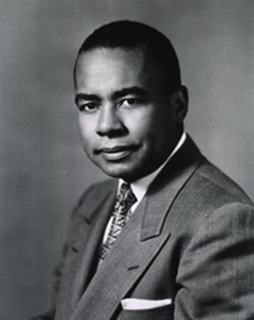 Paul B. Cornely is remembered today as a public health pioneer and civil rights leader whose activism contributed to the desegregation of national healthcare. Dr. Cornely was born on March 9, 1906. on the island of Guadeloupe in the West Indies and grew up in Harlem, New York and then later in Detroit, Michigan. He completed his bachelor’s, medical, and doctorate degrees in Public Health at the University of Michigan in 1928, 1931, and 1934, respectively. At the time, the University of Michigan was among few institutions of higher education accepting Black students, and Dr. Cornely made history there as the first African American to hold a doctoral degree in the field of Public Health. Much of Dr. Cornely’s undergraduate experience and his first year as a medical student at Michigan, the University was led by President C.C. Little, the controversial eugenicist whom the University has now distanced itself from. His experiences at Michigan would influence his later passionate advocacy for desegregation in medicine and education.

While leading a productive career as a researcher and professor of preventive medicine at Howard University, Dr. Cornely also wrote and had published several scientific articles lambasting the racism of health institutions. In one 1942 article, “A Study of Negro Nursing,” he argued the disparities in health programs to meet Black health needs must be solved through education and the employment of Black healthcare professionals.

Although he was already doing his own social justice work by serving the chronically underserved Washington, D.C. Black community and creating public health curriculum for students at Howard, Dr. Cornely formally became involved in the Civil Rights Movement during the 1950s. He co-founded the Imhotep National Conference, which was the only national forum that brought to light discussions on racial discrimination and disparities in the healthcare industry. He was also a sponsor of the Medical Committee on Human Rights. In 1963, he was the local medical coordinator for the March on Washington’s medical contingent, collaborating with hundreds of nurses, doctors, and dentists among other healthcare professionals to serve the nearly 250,000 demonstrators.

In 1970, Dr. Cornely was elected as president of the American Public Health Association (APHA), becoming the first African American to hold the position. In 1972, he was awarded the Sedgwick Medal by the APHA. He continued to be active in the public health sphere into the 1990s, reviewing papers for the Journal and contributing to the APHA in his nineties. The University of Michigan School of Public Health honored his legacy by creating the Paul B. Cornely Postdoctoral Program which seeks to increase the number of doctoral scholars from underrepresented backgrounds conducting research on reducing and eliminating racial and ethnic health disparities.