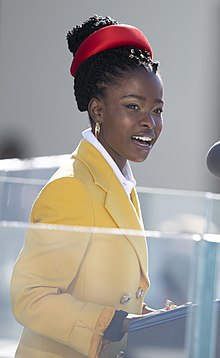 Poet and activist Amanda S. C. Gorman was born on March 7, 1998, in Los Angeles, California. She has an older brother, Spencer, and a twin sister, Gabrielle. All three were raised by single mother Joan Wicks, a sixth grade English Teacher. Amanda was born prematurely and was diagnosed with a speech and auditory impediment in her youth. Gorman began writing songs when she was five years old but moved to poetry once recognizing that she had few musical talents. Growing up, she was given limited access to television, only being allowed to watch 1940s sitcoms, and was required to give a social justice argument if she desired to watch something else.

This inspiring young woman became a youth delegate for the United Nations in 2013 and was chosen as the first youth poet laureate of Los Angeles in 2014. After years of working with WriteGirl, a Los Angeles based non-profit that assists young teen girls to discover the power of their voice through writing, 17-year-old Gorman published her first book, The One for Whom Food Is Not Enough, in 2015. She graduated from New Roads, a private K-12 school in Santa Monica, California in 2016, and after receiving a Milken Family Foundation scholarship, enrolled into Harvard University. In the same year, Gorman founded One Pen One Page, a nonprofit organization which focuses on youth writing and leadership.

In 2017 Gorman became the first person to be named National Youth Poet Laureate. Later that year she also became the first youth poet to open the literary season for the Library of Congress. There she performed her poem, “In This Place: An American Lyric” for ceremony attendees. Later in the year, Gorman introduced Hillary Clinton at the Vital Voices Global Leadership Awards and won a $10,000 grant from media company Ozy at its annual OZY Genius Awards. She was selected as one of Glamour magazine’s “College Women of The Year” in 2018, and was chosen as one of The Root magazine’s “Young Futurists” in 2019. After attending Milan Fashion Week, Gorman was courted by fashion icons Vogue, Prada, and Helmut Lang, and signed a contract with IMG Models.

Gorman delivered a virtual commencement speech in May 2020 during a web series, just before she graduated from Harvard University with a BA in Sociology. Future First Lady Jill Biden met Gorman during her reading at the Library of Congress in 2017 and invited Gorman to read her poem “The Hill We Climb” at the 2021 Presidential Inauguration of her husband, President Joe Biden. Gorman was also featured on the February 2021 cover of Time magazine and listed as a “Phenom” in the magazine’s 100 Next list, where her profile was written by actor, singer, playwright Lin-Manuel Miranda. In the same month, Gorman was commissioned to compose a poem for Superbowl LV, making her the first poet to recite in the pregame ceremony. She recently released books, The Hill We Climb: Poems, (2021) and Change Sings: A Children’s Anthem, (2021) and has two upcoming books that have already been listed as bestsellers on Amazon. She has stated multiple times that she aspires to run for President in 2036.