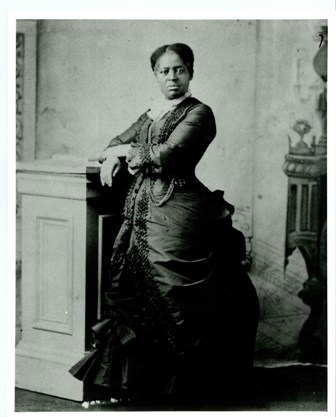 Lucretia Marchbanks, well-documented in western lore for her upright character and superb culinary talents, was one of the first African American women to venture into the Black Hills of South Dakota. Marchbanks was born enslaved on March 25, 1832 near Turkey Creek in Putnam County, Tennessee, the eldest of 13 children born to Edmund and Mary Marchbanks.

When Lucretia was 17, she and her younger brother William accompanied her new owners, Robert and Anne Marchbanks Martin, to Siskiyou County in California where Lucretia cared for the Martins’ growing family and William assisted with a livestock venture. She stayed on with the family after gaining her freedom in 1865 but in 1870 moved to Colorado to join her brothers, Finley and Burr, and sister, Martha Ann “Mattie” Marchbanks.

Lucretia Marchbanks arrived in the Black Hills, Dakota Territory, on June 1, 1876 and by 1878  was employed as a cook at the Grand Central Hotel in Golden Gate, a mining camp near Deadwood. One boarder asked her to bake him a mincemeat pie and was so pleased with the result that when he finally struck it rich in 1881, he gave her a silk dress, which she wore in a rare professional photographs on November 8 that year.

Marchbanks’ fame spread across Dakota Territory when she won a Congregational church fund-raising contest and was voted the most popular woman in the Black Hills on August 15, 1879. A month later she was hired at a wage of $40 a month to cook for the DeSmet Mine company officials at the DeSmet Boarding House in Deadwood. Privately, however, she used her own funds to finance the business ventures of other African American residents in the Black Hills.

In 1883 she bought the Rustic Hotel in Sawpit Gulch near Central City, another Black Hills mining camp, which she operated as a boarding house until September 16, 1886 when she sold it to her sister Mattie.

She purchased a ranch near Rockyford, Wyoming, west of the Black Hills and received title on October 9, 1886 to an adjacent homestead. At her death, on November 22, 1911, her estate was valued at $3,000, a substantial amount for the era.  Lucretia Marchbanks is buried in the Beulah Cemetery in Beulah, Wyoming.