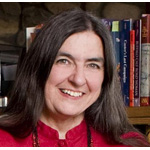 Lilah Morton Pengra operates Multicultural Consulting Services in western South Dakota. She received her BA from Grinnell College, Iowa; masters degrees in African Studies and anthropology and a doctorate in anthropology from the University of Wisconsin, Madison; and conducted post-doctoral work in medical anthropology. She and her husband designed and built an underground, passive-solar home at the edge of the Black Hills where they have lived for 30 years. Pengra became interested in local history while working as part of a grassroots network to decrease racism. She is the author of Your Values, My Values: Multicultural services in developmental disabilities (Paul Brookes Publishing, 2000), Corporals, Cooks and Cowboys: African Americans in the Black Hills and surrounding areas (Buffalo Gap, SD, 2000), Sarah Campbell: The First White Woman in the Black Hills was African American (Lune House Publishing, 2009), and co-author with Jerry Goes In Center of Recognize Our Similarities, Respect Our Differences (Lune House Publishing, 2008).

Stephen Bonga was part of a prosperous Minnesota fur trading family, the first African American residents of that state. Fluent in Native American languages, Stephen and his brothers traveled as translators and voyageurs throughout the upper Great Lakes region of the Midwest. Bonga was born … END_OF_DOCUMENT_TOKEN_TO_BE_REPLACED

Norvel Blair was born into slavery in 1825 in Montgomery County, Tennessee. He is best known as the author of a political tract and autobiography in 1880, Book for the People! To Be Read by All Voters, Black and White, with Thrilling Events of the … END_OF_DOCUMENT_TOKEN_TO_BE_REPLACED

Cleveland Leigh Abbott was born December 9, 1892 in Yankton, South Dakota. He is most remembered for his coaching career at Tuskegee Institute (now University) in Alabama. Abbott was the son of Elbert and Mollie Brown Abbott who moved to South Dakota from Alabama in … END_OF_DOCUMENT_TOKEN_TO_BE_REPLACED

Sarah A. Campbell, one of the first non-Native women in the Black Hills of South Dakota, accompanied Colonel George Armstrong Custer’s 1874 Expedition there as a cook, prospected for gold and silver, and was co-founder of the Custer Park Mining Company. Campbell was born on … END_OF_DOCUMENT_TOKEN_TO_BE_REPLACED

Lucretia Marchbanks, well-documented in western lore for her upright character and superb culinary talents, was one of the first African American women to venture into the Black Hills of South Dakota. Marchbanks was born enslaved on March 25, 1832 near Turkey Creek in Putnam County, … END_OF_DOCUMENT_TOKEN_TO_BE_REPLACED

George Bonga was a 19th century fur trader of black and Native American heritage.  He lived along the shores of Lake Superior, one of the Midwestern Great Lakes. Fluent in French, English, and Native American languages, Bonga served as an interpreter during Indian-U.S. negotiations and … END_OF_DOCUMENT_TOKEN_TO_BE_REPLACED