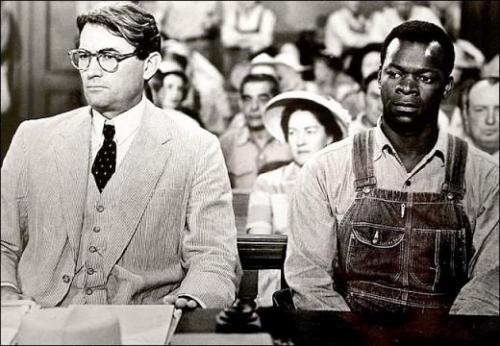 Gregory Peck and Brock Peters, promotional still from To Kill a Mockingbird (1962)
Fair use image

Brock Peters, who emerged as a prominent actor of the 1960s, was born George Fisher in 1927, to Sonny and Alma Fisher in New York City. Prior to concentrating on an acting career that spanned nearly six decades, he attended the University of Chicago, and later City College in New York.

Peters began his career as a stage performer in off-Broadway productions of Kwamina, King of the Dark Chamber, and Anna Lucasta. He then appeared in the Broadway productions Porgy and Bess and South Pacific before making his film debut as Sergeant Brown in the all-black cast film Carmen Jones (1954) opposite Dorothy Dandridge and Harry Belafonte. Five years later, he was Crown in the film version of Porgy and Bess (1959).  But it was his role in the 1962 film adaptation of Harper Lee’s Pulitzer prize-winning novel To Kill a Mockingbird that elevated Peters’ career. In To Kill a Mockingbird, Peters portrays Tom Robinson, a black man wrongly accused of sexually assaulting a white woman in the South. Although his attorney Atticus Finch (portrayed by Gregory Peck) proves his innocence, Robinson is subjected to the racial inequity of the justice system rather than exoneration.

Peters subsequently gained major roles in the films The L-Shaped Room (1962), Major Dundee (1965), The Pawnbroker (1965), and The Incident (1967), which was another film that examined racial tensions of the era. Between film roles he appeared in stage plays such as Othello, and The Great White Hope as prizefighter Jack Jefferson. Though Peters had a lifelong, versatile acting career particularly on stage, he reached the peak of his film career in the late 1960s and then successfully embraced television roles including the daytime soap opera The Young and the Restless and the theatrical version of Star Trek.

During his career, Peters received numerous honors, including the Los Angeles Drama Critics Circle Award, three National Association for the Advancement of Colored People Image Awards, and lifetime achievement awards from the National Film Society and the Screen Actors Guild. In 1976, Peters was inducted into the Black Filmmakers Hall of Fame.

In 2005, Brock Peters succumbed to pancreatic cancer at his home in Los Angeles, California the age of 78.