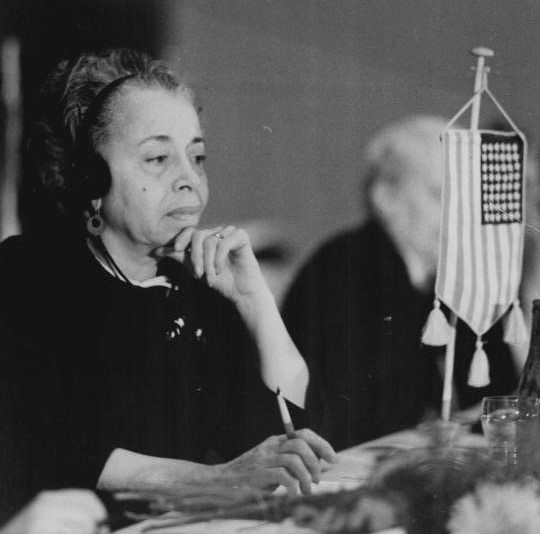 Louise Thompson was one of the first Black women to enroll at the University of California, Berkeley, where she heard an inspirational W.E.B. DuBois lecture that led to her lifelong political activism. Thompson graduated in 1923 from UC-Berkeley with honors in economics. She then taught at Arkansas State College in Pine Bluff (1925-1927) and Hampton Institute in Virginia, where in October 1927 she supported a student revolt against the paternalistic policies of white administrators that included the traditional serenading of antebellum-era plantation songs to white visitors on Sunday afternoons. Her backing of the students led to her dismissal in 1928.

After leaving Hampton, Thompson moved to New York City, New York where she attended the New School for Social Research with a scholarship from the Urban League and began to work closely with many of the leading literary figures associated with the Harlem Renaissance, including Zora Neal Hurston, Alta and Aaron Douglas, and Langston Hughes (whom she had met at Hampton).

Thompson founded the Vanguard Group in her Harlem apartment in the famed Sugar Hill apartment complex at 409 Edgecombe Avenue. Her apartment became a venue for Black intellectuals and artists to gather for music, readings, and Marxist discussions. In 1928 Thompson married writer Wallace Thurman but the marriage lasted six months.

In 1932, Thompson founded the Harlem chapter of the Friends of the Soviet Union and was selected by the Communist Party (CPUSA) to lead a group of African Americans to visit Moscow to make a film on the Black experience in the U.S. This group included many leading intellectuals and artists such as Hughes and author Dorothy West. Although the group arrived in Moscow, the project did not come to fruition due to lack of funding, creative disagreements, and politics between the group and Soviet officials. Nonetheless Thompson’s USSR association and CPUSA support led to her being dubbed “Madame Moscow” by U.S. media.

After six years in the Soviet Union, Thompson returned to New York in 1938 where she helped Langston Hughes establish the Harlem Suitcase Theatre, which featured productions by Hughes and other Black playwrights with all-Black casts. During this period, Thompson also became active in the CPUSA’s defense and in attempts at overturning the conviction of the Scottsboro Boys in Alabama.

Comrade (she never renounced her Communist party membership) Louise Alone Thompson Patterson died of natural causes at 97 on August 27, 1999 while at the Amsterdam Nursing Home in Manhattan, New York.