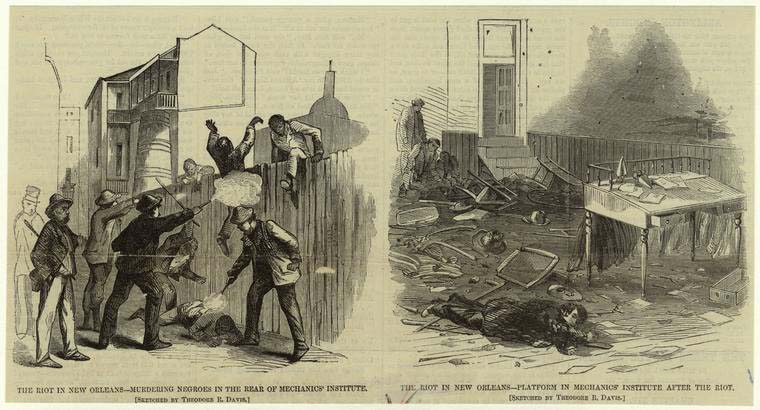 The New Orleans Massacre, also known as the New Orleans Race Riot, occurred on July 30, 1866.  While the riot was typical of numerous racial conflicts during Reconstruction, this incident had special significance. It galvanized national opposition to the moderate Reconstruction policies of President Andrew Johnson and ushered in much more sweeping Congressional Reconstruction in 1867.

The riot took place outside the Mechanics Institute in New Orleans as black and white delegates attended the Louisiana Constitutional Convention. The Convention had reconvened because the Louisiana state legislature had recently passed the black codes and refused to extend voting rights to black men. Also on May 12, 1866, four years of Union Army imposed martial law ended and Mayor John T. Monroe, who had headed city government before the Civil War, was reinstated as acting mayor. Monroe had been an active supporter of the Confederacy.

As a delegation of 130 black New Orleans residents marched behind the U.S. flag toward the Mechanics Institute, Mayor Monroe organized and led a mob of ex-Confederates, white supremacists, and members of the New Orleans Police Force to the Institute to block their way. The mayor claimed their intent was to put down any unrest that may come from the Convention but the real reason was to prevent the delegates from meeting.

As the delegation came to within a couple of blocks of the Institute, shots were fired but the group was allowed to proceed to the meeting hall. Once they reached the Institute the police and white mob members attacked them, beating some of the marchers while others rushed inside the building for safety.

Now the police and mob surrounded the Institute and opened fire on the building, shooting indiscriminately into the windows. Then the mob rushed into the building and began to fire into the crowd of delegates. When the mob ran out of ammunition they were beaten back by the delegates. The mob left the building, regrouped, and returned, breaking down the doors and again firing on the mostly unarmed delegates.

As the firing continued some delegates attempted to flee or surrender. Some of those who surrendered, mostly blacks, were killed on the spot. Those who ran were chased as the killing spread over several blocks around the Institute. By this point both the rioters and victims included people who were never at the Institute. African Americans were shot on the street or pulled off of streetcars to be summarily beaten or killed. By the end of the massacre, at least 200 black Union war veterans were killed, including forty delegates at the Convention. Altogether 238 people were killed and 46 were wounded.

The riot’s repercussions extended far beyond New Orleans. Northerners angry over the violence helped the Republican Party take control of the U.S. House of Representatives and the U.S. Senate in the Congressional elections of 1866. That Republican controlled Congress subsequently passed the Reconstruction Acts of 1867, a series of measures that called for Army occupation of ten former Confederate states and measures that ensured voting rights for African Americans. Meanwhile martial law was immediately reimposed in New Orleans after the riot and Mayor Monroe and other city officials were forcibly removed from office for their part in the massacre.