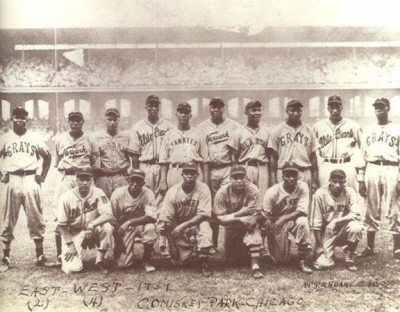 Baseball was originally played by men in rival athletic clubs for recreation. After the Civil War in 1865, baseball’s popularity increased dramatically. At this early time it was still an amateur sport that attracted all races. There were all-white and all-black teams as well as some integrated teams. The integrated teams were abolished when, on December 11, 1868, black ballplayers were barred from participation by the National Association of Baseball Players. The association’s governing body voted unanimously to forbid any club which was composed of one or more people of color from participating.

When baseball achieved professional status the next season, professional teams were not restricted by the amateur association’s ruling and thus allowed integrated teams. By the 1890s African Americans were increasingly excluded from the professional teams, and by the start of the 20th century no black players were in professional baseball. In spite of their exclusion, black baseball players formed and played in all-black teams.

The first black professional team was the Cuban Giants, formed in 1885. The newly formed black teams played as independent ball clubs until the organization of the first black league in 1920. That year Rube Foster, known as the father of black baseball, founded the Negro National League. In 1923, Ed Bolden formed the Eastern Colored League. These two leagues thrived for several years, but eventually declined because of financial difficulties. In 1933, a new Negro National League was formed and the Negro American League was chartered in 1937. These two leagues prospered until the color line was broken. At their height the Negro Baseball Leagues held World Series and all-star games. They were especially successful in World War II when black urbanites, flush with cash from well-paid defense jobs, crowded into stadiums across the nation. The Negro Baseball Leagues provided African Americans their own American pastime.

The end of Negro League Baseball came quickly after World War II. In 1947 the reintegration of the baseball leagues started with the signing of Jackie Robinson by the Brooklyn Dodgers (New York). Robinson became the first 20th Century black baseball player allowed in the all-white professional leagues. After that signing, this was soon followed by the signing of other leading Negro League players, the Negro Baseball Leagues quickly and quietly folded.