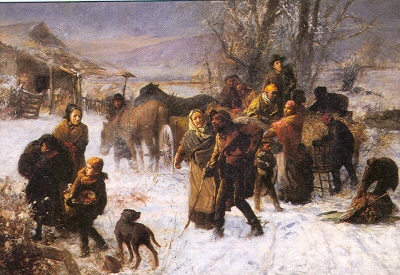 The Underground Railroad was established to aid enslaved people in their escape to freedom.  The railroad was comprised of dozens of secret routes and safe houses originating in the slaveholding states and extending all the way to the Canadian border, the only area where fugitives could be assured of their freedom.  Shorter routes led south from Florida to Cuba or from Texas to Mexico.  The Underground Railroad also included the smuggling of fugitive slaves onto ships that carried them to ports in the North or outside the United States.

The success of the Underground Railroad rested on the cooperation of former runaway slaves, free-born blacks, Native Americans, and white and black abolitionists who helped guide runaway slaves along the routes and provided their homes as safe havens.  Although estimates of the number of people who escaped through the Underground Railroad between 1820 and 1861 vary widely, the figure most often cited is approximately 100,000.

The Underground Railroad derived its name from the terminology used throughout the routes.  The railroad included conductors, including William Still, of Philadelphia, Pennsylvania, arguably the most prominent one.  It also included agents, stations, stationmasters, passengers or cargo, and even stockholders.  The conductors were the guides, agents helped slaves find their way to the routes of the Underground Railroad, the stations were hiding places usually homes, stationmasters were those that hid slaves in their homes, the cargo referred to escaped slaves, and stockholders were those that donated money to keep the Underground Railroad running.

The Underground Railroad worked as a series of networks.  The journey north was an extremely long route and the Underground Railroad provided depots or safe houses along the way.  Those that led the runaway slaves north did so in stages.  No conductor knew the entire route; he or she was responsible for the short routes from station to station.  Once the “cargo” reached another station, it would be passed on to the next conductor until the entire route was traversed.  This limited knowledge protected both the fugitive slaves and the integrity of the routes which sometimes extended over 1,000 miles.

The success of the Underground Railroad generated much animosity among slaveholders and their allies.  Because previous measures had failed to disrupt the this system of slave escape, Congress passed the Fugitive Slave Act of 1850 which allowed slave owners, or their agents to call on Federal, state and local law enforcement officials in non-slaveholding states to assist in capturing fugitive slaves.  The law was greatly abused.  Slave-catchers started abducting free-born African Americans.  Since African Americans could not testify or have a jury present at trial they usually could not defend themselves.  The slave-catcher need only to swear an oath that the black man was in fact a runaway slave and they could then return the slave to its ‘owner’ for a reward.  Ironically the Fugitive Slave Act increased Northern opposition to slavery and helped hasten the Civil War.