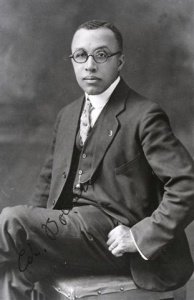 Edward Bolden was a domestic servant, postal worker, and one of the top baseball executives in the history of Negro League baseball. Bolden was born in Concordville, Pennsylvania on January 17, 1881. He got his start in baseball at the age of 28 as a volunteer scorekeeper for the Hilldale club team in Darby, Pennsylvania in 1910. Bolden took over as manager in 1911 and Hilldale grew from an amateur club to a professional team. In 1914, Bolden constructed Darby Field, also known as Hilldale Park, and used the newspapers to promote the Black-owned club. The team did so well that in 1916, Bolden was able to upgrade the park and order new team uniforms.

The Hilldale Daisies were officially incorporated in January 1917 as the Hilldale Baseball and Exhibition Company. Bolden was elected president, and he signed on Otto Briggs as the club’s first paid player. The team finished the 1917 season with a 23-15-1 record, and a $2,915 profit, three times as much as the three previous years combined. In 1920, the National Association of Colored Professional Baseball Clubs (NACPBC) was formed, and Bolden paid $500 for the Hilldale club to be members but left in December and joined Rube Foster’s Negro National League (NNL) as an associate member.

The Philadelphia Baseball Association (PBA) was organized in February 1922. The organization addressed contract jumping by players, umpires, gambling, and discipline issues. Hilldale became members of the PBA, and Bolden was the only Black person to be elected to its governing board. Hilldale resigned from the NNL in 1922 due to a feud between Foster and Bolden. The following year Bolden formed the Eastern Colored League with white promoter Nat Strong. The ECL raided the NNL for players, fueling a two-year war between Foster and Bolden. By the end of the 1924 season, the two leagues made peace and arranged for a Colored World Series between their champions. The championship was played each year between 1924 and 1927, and Hilldale was the only ECL club to win, in 1925, defeating the Kansas City Monarchs.

Bolden suffered a nervous breakdown in 1927 that left him out of the game for a season. He returned in 1928 when he was re-elected as treasurer/ secretary for the ECL and withdrew Hilldale from the ECL to form the American Negro League (ANL) just in time for the 1929 season. Although the season was profitable, baseball was suffering due to the Depression, and Bolden was threatened with a demotion at the postal office, which caused him to leave baseball for the next two years.

In 1932 Bolden returned to professional baseball with a new team, the Philadelphia Stars who joined the reorganized Negro National League formed by Gus Greenlee in 1934 and won championship that year. He replaced Greenlee as league president in 1936 but was ousted in 1937 due to canceling the 1936 championship games. Bolden continued to run the Stars team after the integration of baseball and the merger of the Negro American League and the National Negro League in 1948.

Ed Bolden died on September 27, 1950 in Darby, Pennsylvania at the age of 69 after suffering a stroke. He left his shares of the Philadelphia Stars team to his daughter, Hilda Bolden Shorter, who owned the team until it folded in 1952.