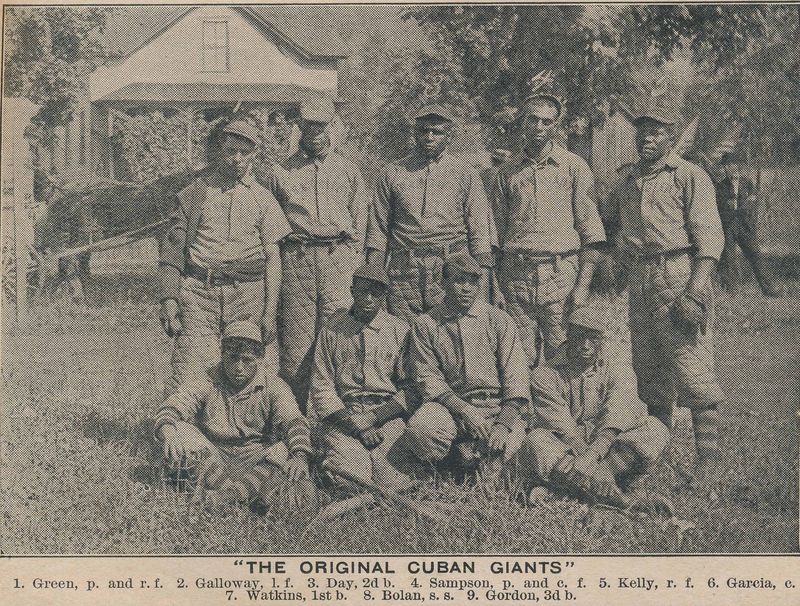 The Cuban Giants were the first African American professional baseball club. The Giants were formed in 1885 at the Argyle Hotel, a summer resort located in Babylon, New York. The team took its name because it played in Cuba during the winter of 1885-1886 and the winter of 1886-1887. The team featured many players who would go on to play in the Negro Baseball Leagues organized after 1920 including Ben Boyd, Sol White, Abe Harrison, Clarence Williams, and George Williams among others. During the spring of 1886, the Cuban Giants were bought by Walter E. Simpson who played at the Chambersburg Grounds in Trenton, New Jersey. There the team would win their first 40 games before losing to the St. Louis Browns.

During the summer 1886, the team was sold to Walter L. Cook. During that time, the Giants signed legendary pitcher George Washington Stovey but he played only one game with the Giants. Like many owner-managers of this era, Cook took over the job of booking games for the team. He also determined salaries for the players as well. The average pay for pitchers and catchers on the team was $18.00 per week. Outfielders and infielders made around $12.00 per week. During the winter of 1886, Cook arranged for the Giants to play in Cuba.

In June 1887, J.M Bright bought the team from Walter Cook. During the same year, the team would become colored champions for 1887. A year later (1888), they would win the colored championship again when they defeated rival teams including the Pittsburgh Keystones, New York Gorhams, and Norfolk Red Sox. In 1889, the Cuban Giants joined the Middle States League, an independent minor baseball league. In 1890, the team name changed to the Colored Monarchs of York, Pennsylvania because they moved there. A year later, a portion of the Cuban Giants went to a rival team called the Gorhams who was managed by S.K. Govern. In 1896, the team was bought by E.B. Lamar Jr. and became the Cuban X-Giants. The team continued to exist until it was disbanded in 1915.