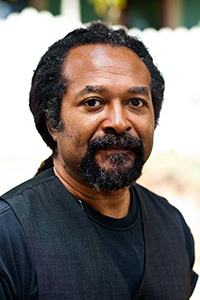 Reginald McKnight is a novelist, short story writer, and educator born on February 26, 1956 in Fürstenfeldbruck, Germany to Frank and Pearl McKnight.  Reginald’s father Frank was a career Air Force sergeant, causing the family to be frequently relocated during Reginald’s childhood.  Before age 16 he had attended 15 different schools, including a segregated school while living in the South.

Before attending college McKnight served in the United States Marine Corps until he was honorably discharged in 1976.  He went on to earn an A.A. from Pike’s Peak Community College in Colorado Springs, Colorado in 1978 before earning his B.A. from Colorado College in 1981.  McKnight then traveled to Senegal to teach English as a second language at the American Cultural Center in Dakar.  He stayed there for one year before returning to the United States to continue his studies at the University of Denver, where in 1987 he earned his M.A. in creative writing.

Though McKnight had been writing before, he was unpublished and credits his experiences in Senegal with changing both himself and his writing.  His first book, Moustapha’s Eclipse (1988) contains short stories set in Senegal and won the 1988 Drue Heinz award for short fiction.  McKnight’s other famous works include I Get on the Bus (1990), The Kind of Light that Shines on Texas (1992), White Boys (1998), and He Sleeps (2001).  He was also an editor for the non-fiction works African American Wisdom (1994) and Wisdom of the African World (1996).

McKnight has won many other awards for his literary works.  They include an NEA fellowship, an O. Henry Award, the Kenyon Review Award for Literary Excellence, the PEN Hemingway Special Citation, the Pushcart Prize, a Thomas J. Watson Foundation Fellowship, a Whiting Writer’s Award, and a National Endowment for the Arts Grant for Literature.