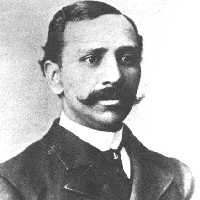 Edward P. McCabe was an African American politician and businessman most notable for his promotion of black settlement in Oklahoma and Kansas. Born in 1850 in Troy, New York, McCabe would attend school until his father’s death when he left school to support his family as a clerk on Wall Street. In 1872, he earned a job as a clerk in Chicago. Two years later, McCabe left Chicago for Kansas and arrived in the growing black community of Nicodemus in 1878.

In Nicodemus, McCabe established himself as an attorney and land agent. When Graham County was established in 1880, McCabe was appointed temporary clerk and officially elected as county clerk the next year. In 1882, he successfully stood as the Republican candidate for state auditor, a victory which made him the most important black office holder outside of the south. However, as Nicodemus’s fortunes reversed and the town began to hemorrhage residents, McCabe left first for Washington and then for Oklahoma.

In Oklahoma, the number of blacks involved in the land rush as the territory opened to non-Indian settlement in 1889 led McCabe to realize the potential of the new territory, both as a haven from racism and as a potential source of personal acclaim and profit for himself. He purchased 320 acres, established Langston City, named for a recently elected black congressman, and hired agents to travel to the South to attract new settlers. McCabe promised, through these agents, that new settlers would be coming to “the… paradise of Eden and the garden of the Gods,” and capitalized on the rapidly deteriorating conditions in the South arguing: “Here the Negro can rest from mob law, here he can be secure from every ill of the southern policies.” The recruitment campaign was a success and by 1891, the town had over 200 residents.

Langston City was part of McCabe’s larger political ambitions. He hoped that broad African American settlement in the Oklahoma territory would catapult him into the Governor’s office. This prospect was greeted with excitement by the black press and was condemned by white and Native Americans. While McCabe was successful in promoting and inspiring all black towns in Oklahoma, between 1890 and 1910 thirty new all-black towns would be established, he would fall short of his political goals. He would never be governor and soon after Oklahoma was accepted into the union in 1907, the state legislature would pass transportation segregation legislation. McCabe would challenge the law in court, selling his Oklahoma home in the process to pay legal fees, only to have it upheld by the US Supreme Court in 1914. Edward McCabe died in Chicago in 1920 and was buried in Topeka, Kansas.