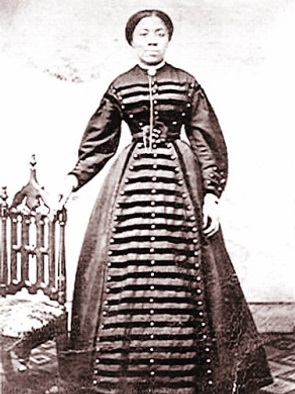 Inventor and women’s rights advocate Lyda Newman is best known for a newly-designed hairbrush patent and her effort to fight for women’s rights; particularly, women’s suffrage.
Newman was born in 1885 to a steelworker and a housewife in Ohio. Little is known about her childhood. Her parents wanted her to gain new experiences and have an opportunity for a better life, so they supported her move to New York City although the date of that move is unknown.

Newman’s hairbrush was patented in 1898 when she was 13 years old. Newman’s interest in making this newly designed hairbrush began when she would do her hair and started doing other women’s hair after moving to New York. In search to find a more efficient way to fix her clients’ hair, Newman invented the new hairbrush style. By getting it patented, she became the third black woman ever to receive a patent.

Newman’s design was specifically made for African American hair and had synthetic bristles instead of animal hair. The synthetic bristles were firmer, lasted longer, and did not break as easily when used on ethnic hair. The synthetic bristles could be moved farther apart and combed through hair easier and they could be detached and reattached very quickly, which improved efficiency. Hairdressers could now take the bristles out and have a new brush much quicker than cleaning the entire brush between clients. Additionally, there was a compartment in the brush that debris such as dandruff and dirt would fall into and could easily be removed for cleaning.

Newman’s brush was also unique because it had an air chamber that allowed airflow to the bristles, which helped the brush dry much faster. By making all of these changes to the brush and adding synthetic materials, the new hairbrush was cheaper and easier to manufacture. This made the brush accessible to many women of different backgrounds.

Newman is also remembered for her women’s rights advocacy. By 1915 Newman was highlighted in multiple newspapers for her suffrage work. She was one of the organizers of an African American branch of the Woman Suffrage Party which fought to give women the legal right to vote. Throughout the first decade of the 20th century Newman campaigned in her neighborhood in New York to raise awareness of voting.

Lyda Newman was a remarkable young black woman, but unfortunately the historical record of all that she accomplished in her life remains to be discovered. Even her death date is unknown. Still, her memory lives on through her hairbrush design, which finally allowed African American women to have a hair product catered to them and their hair and the change that she helped create by enabling all women to have the vote.