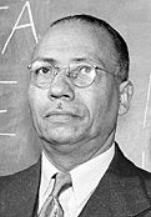 Lorenzo Dow Turner was an African American linguist who headed the English department at Howard University in Washington, D.C. from 1920 to 1928, and later headed of the English department at Fisk University (1929 to 1946). His accomplishments within his career in academia include the creation of the African Studies curriculum at Fisk University in 1943 and participation in the early African Studies program at Roosevelt University, beginning in 1946. Turner is best known for his research on the Gullah language or dialect, a provincial language spoken by descendants of African slaves in coastal South Carolina and Georgia. Later in life, Turner played a role in founding the training program for Peace Corps volunteers going to Africa.

Lorenzo Dow Turner was born on October 21, 1890 in Elizabeth City, North Carolina. His parents, Rooks Turner and Elizabeth Freeman emphasized the importance of education while raising Turner and his three brothers. Rooks Turner earned a Master’s degree from Howard University, and two of Lorenzo Dow Turner’s brothers also earned graduate level degrees in the 1940s (?) which was unusual for that time. Lorenzo Dow Turner earned a Master’s degree from Harvard University in Massachusetts in 1917, before enrolling in the University of Chicago in Illinois where he earned a Ph.D. in English Literature in 1926. From 1917 to 1928 Turner taught at Howard University. After leaving Howard University, Turner unsuccessfully tried to establish the Washington Sun newspaper, which closed within a year.

In 1929, Turner first heard Gullah speakers while teaching at South Carolina State University. This experience would lead him down a long journey of research discovery into the Gullah language and its origins.  Eventually he would be known as the “father” of Gullah studies. Turner’s research which began in the South Carolina and Georgia Low Country would eventually extend to Sierra Leone in Africa, and Brazil in South America (along with other areas, nationally and internationally where creole and African languages were influential). Turner investigated the influence of African languages on the dialect spoken by Gullah speakers in their isolated communities. By doing so, he exposed the complexities of the African diaspora in America, and how it pertained to cultural assimilation.

In 1949, Turner published his most well-known work, Africanisms in the Gullah Dialect. His arguments were so convincing, that his thesis (Gullah speakers are influenced by African languages) faced little criticism. To this day this classic work is a symbol of Diaspora influence among African descendants in America. Turner’s research also solidified his reputation as a founding figure in American linguistics and African American studies.

Lorenzo Dow Turner retired from Roosevelt University in 1970.  He died in Chicago, Illinois on February 10, 1972 of heart failure.  He was 81.