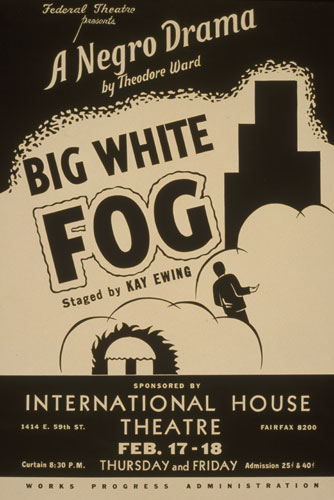 Powell Lindsay, actor, director, playwright, and producer, was born in Philadelphia, Pennsylvania.  He attended Virginia Union University as well as the Yale University School of Drama.  At Yale, Lindsay became frustrated by the limited and often stereotypical African American roles presented by the School of Drama productions.  Many of Lindsay’s works for the stage and screen reflected his desire to show more realistic portraits of black life and black community issues.

In the late 1930s, Lindsay wrote the play Young Man of Harlem.  The Harlem Suitcase Theatre, which was founded by Langston Hughes, Hilary Phillips, and others in 1938, planned on staging the play, but the Theatre closed before it was produced.

In the late 1940s, Lindsay formed the Negro Drama Group, which was sometimes referred to as Powell Lindsay’s Drama Group. The Group toured the South with productions such as Murder Without Crime, Night Must Fall, and Claudia. In 1947, the Group staged Tobacco Road starring Lindsay and Estelle Hemsley. The show played in New Haven and at the Howard Theatre in Washington D.C. before transferring to Broadway in 1950.

In the summer of 1948, Lindsay participated in an arts workshop at Florida A and M College, where he taught playwrighting as well as directed and acted in stage shows.  He also starred in and produced Born Yesterday (1953) in Washington D.C. and New York.

In the early 1950s, Lindsay began to produce theatre in Detroit, Michigan.  He wrote, directed, and produced Flight from Fear (1954) at Detroit’s Masonic Temple and This is Our America (1956), a pageant about black achievement. By the 1960s, Lindsay moved permanently to Michigan, where he founded the New Suitcase Theatre.  In the early 1970s, the New Suitcase Theatre toured North America and Europe with …These Truths…, which presented important events in African American history in Act I and Langston Hughes’s work in Act II.  The Theatre won awards and honors from many local and national organizations for its work.