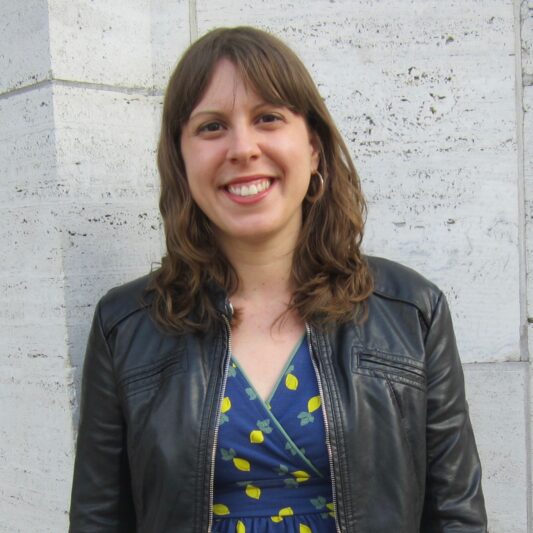 Michelle Granshaw is an Associate Professor and Director of Graduate Studies in the Department of Theatre Arts at the University of Pittsburgh. She is affiliate faculty with the Global Studies Center, the European Union Center of Excellence/European Studies Center, Gender, Sexuality, and Women Studies Program, and Cultural Studies. At Pitt, she teaches in the BA, MFA, and PhD programs and mentors student dramaturgs. Granshaw was honored to receive the University of Pittsburgh’s 2021 Dietrich School of Arts and Sciences Excellence in Graduate Mentoring Award.

As a cultural historian, her research focuses on disenfranchised, and migrant communities and how they shaped and were influenced by the embodied and imaginative practices within theatre and performance. Her research interests include U.S. theatre, popular entertainment, and performance; performances of race, ethnicity, gender, and class; global and diasporic performance; and historiography.

Granshaw’s articles have appeared in Theatre Survey, Nineteenth Century Theatre and Film, Popular Entertainment Studies, Journal of American Drama and Theatre, Theatre Topics, and the New England Theatre Journal. In 2014, Granshaw was awarded the American Theatre and Drama Society Vera Mowry Roberts Award for Research and Publication for her Theatre Survey (January 2014) article “The Mysterious Victory of the Newsboys: The Grand Duke Theatre’s 1874 Challenge to the Theatre Licensing Law.” Her book, Irish on the Move: Performing Mobility in American Variety Theatre (University of Iowa Press, 2019) argues that nineteenth-century American variety theatre formed a crucial battleground for anxieties about mobility, immigration, and ethnic community in the United States. It was named a finalist for the 2019 Theatre Library Association George Freedley Memorial Book Award and supported by grants and fellowships including the Hibernian Research Award from the Cushwa Center for the Study of American Catholicism at the University of Notre Dame, American Theatre and Drama Society Faculty Travel Award, and Harry Ransom Center Research Fellowship. “Inventing the Tramp: The Early Tramp Comic on the Variety Stage,” part of Irish on the Move’sfirst chapter, also won the 2018 Robert A. Schanke Theatre Research Award at the Mid-America Theatre Conference. Currently, she is working on a new monograph titled The Fight for Desegregation: Race, Freedom, and the Theatre After the Civil War. In November 2022, she received an American Society for Theatre Research Research Fellowship in support of the project.

Granshaw currently serves on the Executive Board for the American Theatre and Drama Society (term 2021-5) and co-organizes ATDS’s First Book Bootcamp and Career Conversations series.

Actress Pam Grier is best known for her portrayal of tough and sexy crimefighters in the 1970s genre of “blaxploitation” films. Her later work in the 1998 film Jackie Brown earned her a Golden Globe nomination. Pamela Suzette Grier was born in Winston-Salem, North Carolina … END_OF_DOCUMENT_TOKEN_TO_BE_REPLACED

Black Swan Records was the first black-owned recording company that sold popular music to black audiences. Black Swan Records specialized in jazz and blues recordings, but it also became the first company to record black classical musicians. During its brief existence from 1921 and 1923, … END_OF_DOCUMENT_TOKEN_TO_BE_REPLACED

Multi-talented performer Billy Eckstine, known as “Mr. B.,” was a jazz musician and balladeer who gained popularity during the post-World War II era. His good looks, fashionable style and smooth baritone vocals led to a long and successful musical career, earning a place as DOWNBEAT’s … END_OF_DOCUMENT_TOKEN_TO_BE_REPLACED

Dick Gregory, comedian, actor, and civil rights activist, was born Richard Claxton Gregory in 1932 in St. Louis, Missouri.  Gregory’s father left the family when Gregory was a child forcing his mother, Lucille, a maid, to raise him and his five siblings.  During his high … END_OF_DOCUMENT_TOKEN_TO_BE_REPLACED

Godfrey MacArthur Cambridge, actor and comedian, was born in New York City in 1933.  His father Alexander Cambridge and his mother Sarah Cambridge were born in British Guiana.  They moved to Sydney, Nova Scotia, Canada and then Harlem, New York.  Before emigrating, his father worked … END_OF_DOCUMENT_TOKEN_TO_BE_REPLACED

The Mills Brothers, a musical quartet, originally featured John Jr. (b. 1910), Herbert (b. 1912), Harry (b. 1913), and Donald Mills (b. 1915).  Born in Piqua, Ohio, the Mills Brothers lived with their father John Hutchinson Mills, a barber, and their mother, Eathel Harrington. As … END_OF_DOCUMENT_TOKEN_TO_BE_REPLACED

Art Blakey, jazz drummer and band leader, was born Arthur William Blakey in Pittsburgh, Pennsylvania on October 11, 1919.  Blakey’s father, Burtrum, who worked as a barber, left his family when Blakey was a newborn.  Blakey lost his mother, Marie Roddericker, before his second birthday.  … END_OF_DOCUMENT_TOKEN_TO_BE_REPLACED

Actress Thelma “Butterfly” McQueen was born in Tampa, Florida on January 8, 1911. Her father, Wallace McQueen, worked as a stevedore and her mother, Mary Richardson, was a housekeeper and domestic worker. After McQueen’s parents separated, her mother moved from job to job and McQueen … END_OF_DOCUMENT_TOKEN_TO_BE_REPLACED

Carmen McRae, a jazz singer and songwriter, was born on April 8, 1920 in Harlem, New York. Her father Osmond Llewelyn McRae was born in Santa Cruz, Jamaica in 1891; he moved from Jamaica to Costa Rica to Cuba and then to New York City, … END_OF_DOCUMENT_TOKEN_TO_BE_REPLACED