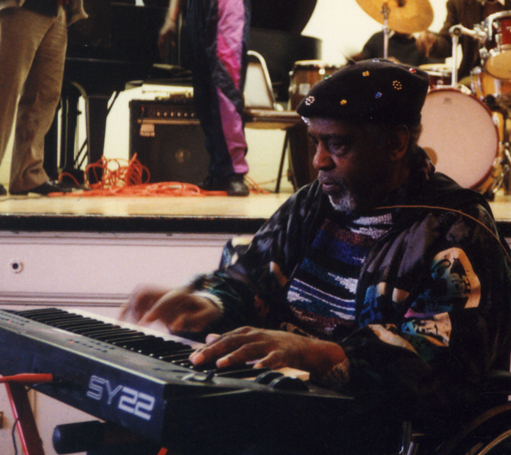 Jazz pianist, bandleader, composer, and cosmic philosopher Le Sony’r Ra, or Sun Ra, remains an influential and controversial figure in jazz history. He is largely remembered for his Astro Black Mythology that incorporated aspects of ancient Egyptian philosophy and science fiction, as well as his contributions to avant-garde jazz and afrofuturism.

Ra “arrived on earth” as Herman Poole Blount on May 22, 1914 in Birmingham, Alabama, though he would later deny both his birth and his given name. Composing original music and poetry by age twelve, Blount played in several bands before receiving a scholarship to Alabama State Agricultural and Mechanical Institute for Negroes. After studying music education for a year, Blount quit school, later claiming to have had a visionary experience in which he traveled to the planet Saturn and was told to stop attending college. Blount returned to Birmingham, where he assembled a band for rehearsal purposes only. During this period, he went by the name Sonny Blount. He was a conscientious objector and briefly imprisoned during World War II.

In 1945, Blount moved to Chicago where he played piano for various musicians and singers, among them Fletcher Henderson, Gene Ammons, and Billie Holiday. In Chicago, he became increasingly interested in outer space and ancient Egyptian mythology, reading voraciously and developing his own philosophy that incorporated science fiction, ancient Egypt, and music. On October 20, 1952, Blount legally changed his name to Le Sony’r Ra (“Ra” being the name of the sun god of ancient Egypt); Sun Ra became the abbreviated version of his new name.

After forming the Space Trio with Pat Patrick and Tommy Hunter in 1952, Ra assembled a larger band that he eventually named the Solar Arkestra. Under Ra’s direction, the Arkestra began as a hard-bop big band but was soon incorporating free improvisation and experimenting with primitive electric keyboards. Ra demanded precision and discipline in his musicians; they lived as a collective and rehearsed continuously. Ra and the Arkestra moved to New York City in 1960 and then settled in Philadelphia in 1968. They performed live regularly, often dressed in colorful robes, capes, and space headgear. Ra recorded at least 1,000 compositions on over 120 albums, many for his own company, El Saturn Research (or El Saturn Records), which he founded in 1957 with Alton Abraham.

Throughout the late 1960s and early 1970s, Sun Ra and the Arkestra embarked on numerous tours, including visits to the west coast, the United Kingdom, Europe, and finally Egypt in 1971. Upon returning to the United States, Ra was appointed as a lecturer at the University of California, Berkeley in 1971, teaching a course entitled The Black Man in the Cosmos. In 1972, he and the Arkestra filmed the movie version of the album Space is the Place. Sun Ra and his Arkestra continued to rehearse and tour throughout the 1980s and early 1990s, though Ra suffered from a stroke in 1990. He eventually became too ill to perform and returned to Birmingham. He died there on May 3, 1993.