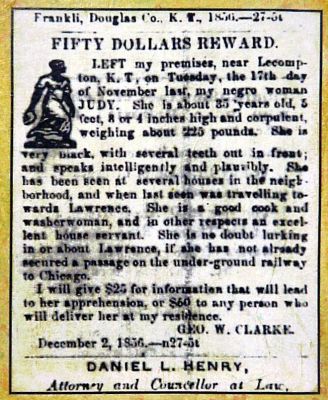 In the following article University of Tulsa historian Kristen T. Oertel describes the people who like John Brown helped enslaved African Americans in Missouri escape to freedom in Kansas Territory through the western Underground Railroad.

African Americans have valorized John Brown throughout history, linking a white man to a pantheon of radical black heroes from Frederick Douglass to Rosa Parks.  Delegates to the second Niagara Convention, future founders of the NAACP, designated “John Brown’s Day” in 1906 to commemorate Brown’s sacrifices for black freedom, and monuments in his honor have been erected in places like Western University, a now-defunct historically black college in Kansas City, Kansas.  While admiration of Brown is well-placed, it often overpowers the acknowledgement of Brown’s black and white allies and complicates an understanding of their role in his abolitionism, particularly in Kansas, where Brown struck his first violent blows against slavery.

Like the focus on Brown’s abolitionist martyrdom, studies on “Bleeding Kansas” often fail to highlight the ways in which black slaves and their white allies impacted the struggle between slavery and freedom that ensued on the country’s western border in the 1850s.  After the passage of the Kansas-Nebraska Act in 1854, thousands of antislavery settlers from Massachusetts, Ohio, and other northern states clashed with their proslavery counterparts from Missouri, Kentucky, and Alabama as both groups attempted to establish “popular sovereignty” in the region.  Some of these proslavery settlers arrived in Kansas with their slaves, hoping to expand the peculiar institution into the far West and determined to defend their “property” rights with strict slave codes and a proslavery territorial constitution.

But many of these black emigrants quickly resisted their enslavement, and they found white abolitionists such as Brown ready to assist them.  Slave resistance in the region ran the gamut from running away to poisoning to murder, but flight from nearby Missouri plantations was the most common form of overt resistance.  In March of 1855 The Kansas Weekly Herald, a proslavery paper based in Leavenworth, chronicled the escape of a Missouri slave and his eventual capture by a Shawnee Indian who returned him to his master.  The paper worried about the increasing number of “Negro stealers” and “d—d abolitionists” who were moving into the region, and dozens of runaway ads began popping up in the territorial papers. Although the actual number of white abolitionists paled in comparison to their larger-than-life reputation as “negro stealers,” slaves found extra courage to abscond from their masters when they knew they could escape on the freshly-laid tracks of the Underground Railroad (UGRR).  One newspaper editor from Waverly, Missouri, complained about the growing problem and argued that the “U.G.R.R. is doing a smashing business—to the owners of Negroes especially…. The whole country is ‘lousy’ with abolitionists.”

Fugitive slaves and white abolitionists worked together to thwart local authorities, in part because the territorial slave code made it a crime for whites and blacks to encourage slave resistance.  In 1857 Mrs. James Abbott harbored a runaway when her husband was away on business, and she hid the fugitive in the basement until dark.  The pair’s safety stood in jeopardy when two proslavery men knocked at her door that evening and demanded dinner, but Abbott knew they were also looking for her house guest.  She convinced the men to leave by showcasing her recently-injured arm and thus her inability to cook, but they remained on her property and began circling the homestead with a bloodhound.  Abbott knew she had to act quickly, so she convinced the slave to take an axe and kill the hound while its owners were busy tending to their horses in a nearby ravine.  The slave snuck outside and committed the necessary deed, and the slave catchers finally left the property, perhaps in search of the dog that had suddenly vanished.  Thanks to Abbott’s axe and the slave’s courageous response, the two escaped an altercation with the proslavery men and the slave moved on to the next station the following morning.

Dozens of slaves found refuge in the increasing number of UGRR stations in the region surrounding Lawrence and Topeka.  Abolitionist John Bowles boasted that his colleagues in Lawrence had facilitated the escape of roughly three hundred fugitives between 1855 and 1859.  In addition to Lawrence, the river town of Quindaro quickly gained a reputation as an “abolition hole,” and women like Clarina Nichols met regularly at a nearby homestead she called “Uncle Tom’s Cabin,” where she and her neighbors pledged to work for “emancipation without proclamation.”  One slave who fled from nearby Parkville, Missouri, arrived in Quindaro carrying a pair of broken iron manacles which they filed off his foot.  Nichols kept the manacles as a souvenir, but sent the fugitive to the next safe house, confident that he would arrive safely. Nichols claimed that “of the many slaves who took the train of freedom” to Quindaro, only one was ever captured and returned to Missouri.  News of the region’s importance in the network to freedom spread quickly;  after visiting Kansas Territory in the fall of 1858, noted abolitionist Samuel Tappan reported to Thomas Wentworth Higginson that the Underground Railroad was “in full blast.”

Conductors on the Kansas UGRR were so confident of their success that in 1859 James Montgomery, an abolitionist who worked in southern Kansas, claimed that runaways would be safe if they made it to Kansas, perhaps negating the need to move further north to Canada.  A year later he wrote, “It will cost less to protect them here, than it will to send them to Canada; and besides, the principle is much better.  ‘He shall dwell among you, even within thy gates, in a good place where it liketh him best.’  Deut. XXIII: 15, 16 does not allow us to send him to Canada against his will.”  Guided by scripture, Montgomery believed that black fugitives had a right to remain in their own country, and he worked with his fellow abolitionists to sustain their safety and to encourage more slaves to escape.

Montgomery and others identified a few exceptional fugitives and, like a small army of Harriet Tubmans, they returned to their native states to guide more runaways to Kansas.  Fugitive Napoleon Simpson escaped to northern Iowa but then returned to Kansas six months later to rescue his beloved wife, whom he had left behind in Jackson County, Missouri.  Lawrence resident John Bowles reported that one former slave he knew had “assisted in the escape of no less than twenty five of his fellow beings, and that he had also given information or sown the seed that would make a hundred more free men.”  Bowles further claimed that this particular slave had been captured twice and injured by gunfire each time, but he ensured his freedom by killing his master during his final escape.

Because of the inevitable violence that accompanied slave resistance, men like Bowles and Montgomery pleaded with their eastern colleagues to send guns and ammunition to these freedom fighters so that they could defend themselves.  Methodist minister John E. Stewart, dubbed the “fighting preacher” by his peers, armed himself and his “black brethren” as he pretended to be a simple peddler selling wares to Missouri slaves and their masters.  After returning from one sojourn into slave territory and rescuing two slaves, he reported to fellow abolitionist Thaddeus Hyatt that their success depended sometimes “upon the fleetness of our horses, sometimes on a steady hand when the revolver cracks.”  Fugitive Napoleon Simpson used a Sharps rifle to defend white abolitionist Joseph Gardner’s property in the summer of 1860 when a group of proslavery men arrived in the middle of the night to attack him and his UGRR host, Gardner.  Simpson shot and injured one of the “armed assassins,” but unfortunately, one of them retaliated and fatally wounded Simpson.  Though not always successful, these freedom seekers knew that guns were sometimes essential components of guaranteeing liberty, and both white and black abolitionists did not hesitate to defend themselves with violence.

In fact, John Brown’s final act of abolitionism in Kansas, committed just ten months before his more famous raid at Harper’s Ferry, involved both white and black abolitionists.  In late December, 1858, Brown and several other men like George B. Gill, planned to rescue Jim Daniels, a Missouri slave who belonged to an estate that was scheduled to be sold at auction.  Brown raised a small party of men and recovered not only Daniels and his immediate family, but several other slaves who lived on a nearby farm; the party numbered eleven when they returned to Kansas and began their trek to Canada.  But soon after leaving a UGRR station near Holton, Kansas, Brown’s party caught wind of a pursuing company of Missourians.  Brown immediately sent to Topeka for help, but apparently he resolved the situation before any reinforcements arrived.  Brown armed the fugitives and together they emerged from the woods ready for battle, surprising the proslavery men, who promptly hightailed it out of danger.  In this misnamed “Battle of the Spurs,” at which no shots were fired, Brown and the fugitives coordinated their defense, and their pursuers were clearly surprised by the united black/white military front that challenged them.

So while Brown continues to receive accolades for his historic commitment to black freedom, one hopes that his black and white allies, men like Napoleon Simpson and women like Clarina Nichols, will now also be remembered as his fellow soldiers in the fight for freedom.  Simpson, along with hundreds of other fugitive slaves, linked with Nichols and dozens of white abolitionists to make the Kansas Underground Railroad a tough track to cross for Missouri slaveholders.