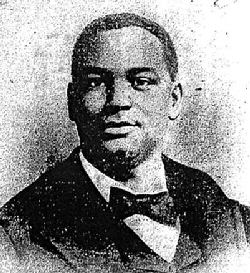 John Carter Leftwich was born on June 6, 1867 in Forkland, Alabama.  The first son of Frances Edge and Lloyd Leftwich, one of Alabama’s last black Reconstruction Era state senators, John graduated from Selma University in 1890.  As a young man, Leftwich held a deep admiration for Booker T. Washington, and wrote to him constantly for aid and advice.  In 1897, possibly with Washington’s support, Leftwich was appointed Alabama’s Receiver of Public Money by President William McKinley.  During this time Leftwich also founded an all-black town named Klondike.  In 1902, however, Leftwich lost the support of Washington.  Later that year Alabama blacks were disfranchised.  These events led Leftwich to migrate to Oklahoma Territory to begin anew.

In Oklahoma Territory, Leftwich founded a newspaper, the Western World, and corresponded with Governor T.B. Ferguson, hoping to resume his bureaucratic career.  He also stumped for the Republican Party and in support of industrial education for African Americans.  His efforts to regain a position in government failed.

In 1904 Leftwich accepted the presidency of Sango Baptist College in Muskogee, Indian Territory.  This commenced Leftwich’s almost twenty-year career educating African American, Freedmen, and some Native American children in Oklahoma.  In 1905, he established the Creek-Seminole College in the all-black town of Boley.  Financial difficulties plagued Leftwich, and within a few years he moved the school to Clearview, another all-black town.  Later, he established the Bookertee Agricultural and Mechanical College in the all-black town of Bookertee.  In 1921, the school admitted children displaced by the Tulsa Race Riot.

Throughout this time Leftwich constantly sought financial assistance for his endeavors from Oklahoma governors and wealthy white patrons.  To continue currying their favor, Leftwich joined the Democratic Party in 1910 even though Oklahoma blacks were disfranchised via the grandfather clause.  Leftwich’s efforts met with limited success, however, and money troubles continued to haunt him, ultimately leading to his death.  On July 14, 1923, John Carter Leftwich was shot to death by a schoolteacher whom he had dismissed without paying.