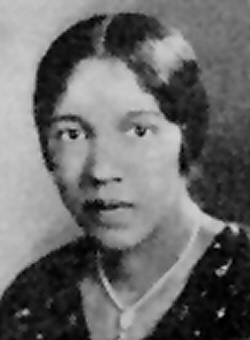 Born in 1903 in Columbus, Ohio, Ruth Ella Moore was the first African American woman in the United States to earn a Ph.D. in the natural sciences.  Her doctorate was in the field of bacteriology.  Moore earned a B.S. in 1926 and a M.S. in 1927 from Ohio State University.

Moore supported herself during graduate school by teaching English and hygiene at Tennessee State College (now Tennessee State University) in Nashville.   Her dissertation on tuberculosis earned her a doctorate in bacteriology in 1933, also from Ohio State University.  Dr. Moore was hired as an assistant professor at Howard University Medical College in 1940.  From 1952 to 1957 she chaired the bacteriology department.  During that period she was promoted to associate professor.  In 1957 Moore stepped down from her leadership position.  Though there are gaps in Howard’s personnel records, it is generally believed that Moore continued to teach and conduct research on bacteriology at Howard until she retired in 1973.  Her research at Howard focused on blood groups and enterobacteriaceae, a family of bacteria which includes salmonella and E. coli.