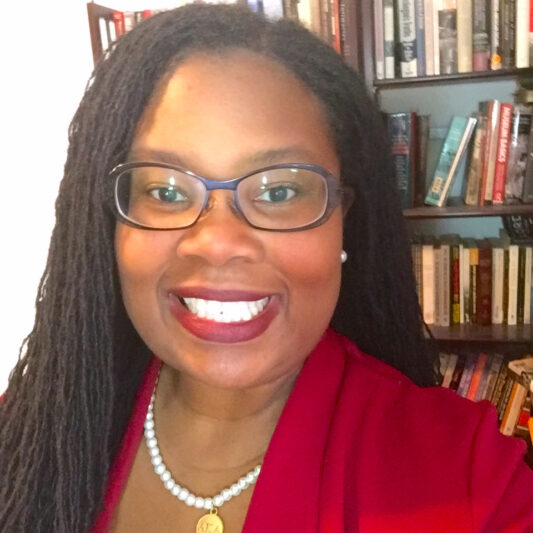 Melissa N. Stuckey has been assistant professor of African American history at Elizabeth City State University since 2017. She teaches a variety of courses, including North Carolina African American History and Black Women’s History. Her research interests center on the role of African American institutions in the struggle for Black freedom and civil rights. In 2019, Dr. Stuckey won over $500,000 from the National Park Service and the Institute for Museum and Library Services to help fund the rehabilitation of ECSU’s Rosenwald School building and Principal’s House. The long-term goal is to create within these historic structures an institute to collect, preserve, and share the histories of African American life and educational pursuits in Northeastern North Carolina. She is also leading several local African American history and historic preservation projects in Elizabeth City, in Old Oak Grove Cemetery, and the historic Sheppard Street-Road Street neighborhood that borders ECSU’s campus.

A specialist in early twentieth-century Black activism, she is author of several articles and book chapters, including “Boley, Indian Territory: Exercising Freedom in the All Black Town,” published in 2017 in the Journal of African American History and “Freedom on Her Own Terms: California M. Taylor and Black Womanhood in Boley, Oklahoma” published in This Land is Herland: Gendered Activism in Oklahoma, 1870s to 2010s (University of Oklahoma Press, 2021). Dr. Stuckey is currently completing her first book, entitled “All Men Up”: Seeking Freedom in the All-Black Town of Boley, Oklahoma, which interrogates the black freedom struggle in Oklahoma as it took shape in the state’s largest all-black town.

Committed to engaging the public in important conversations about African American history, Stuckey is also a contributing historian on the NEH-funded “Free and Equal Project” in Beaufort, South Carolina which interprets the story of Reconstruction for national and international audiences and is senior historical consultant to the Coltrane Group, a non-profit organization in Oklahoma committed to helping these towns survive in the 21st century.

Dr. Stuckey earned her Ph.D. from Yale University and her A.B. from Princeton University.

Langston, Oklahoma is one of the few remaining all-black towns located in the former Oklahoma Territory.  The town, which opened for settlement on October 22, 1890, was named for John Mercer Langston, who took office as the first black Virginian to serve in the United … END_OF_DOCUMENT_TOKEN_TO_BE_REPLACED

John Wesley Blassingame was one of the preeminent scholars in the study of enslaved African Americans.  His early monographs The Slave Community (1972) and Black New Orleans, 1860-1880 (1973) shattered racist and stereotypical portrayals of African American life by using testimony and evidence left by … END_OF_DOCUMENT_TOKEN_TO_BE_REPLACED

The Creek Seminole College was officially opened in 1906 in Boley, a black town in Creek Nation, Indian Territory (today Oklahoma).  The school’s founder and president was John C. Leftwich, a graduate of Selma University in Alabama.  Leftwich built the college on five acres of … END_OF_DOCUMENT_TOKEN_TO_BE_REPLACED

In the early twentieth century Boley, Oklahoma was the largest predominantly black town in the United States.  Boley was officially opened for settlement in 1903 in Creek Nation, Indian Territory along the Fort Smith and Western Railroad.  The interracial group that founded Boley included Lake … END_OF_DOCUMENT_TOKEN_TO_BE_REPLACED

John Carter Leftwich was born on June 6, 1867 in Forkland, Alabama.  The first son of Frances Edge and Lloyd Leftwich, one of Alabama’s last black Reconstruction Era state senators, John graduated from Selma University in 1890.  As a young man, Leftwich held a deep … END_OF_DOCUMENT_TOKEN_TO_BE_REPLACED