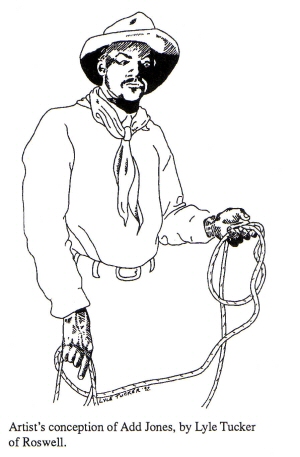 Addison Jones’s birthplace is of uncertain origin, but he was likely born in Gonzales or Hays County, Texas. His cowboy skills led to his recognition in western Texas and eastern New Mexico as “the most noted Negro cowboy that ever ‘topped off’ a horse.”  Addison, who was known as “Nigger Add” or Old Add, often was mentioned in memoirs and accounts of prominent cattlemen and cowboys who worked with him on the Littlefield Ranch (LFD).  Addison’s skills at roping and breaking horses made him a notable among cowboys who usually led lives of anonymity, failing to generate a single comment about their presence. Stories abound of Addison roping a horse at full gallop and snatching it off its feet.

Addison’s fame was further extended when pioneering song collector/writer, N. Howard (Jack) Thorp, composed a poem and later a song that celebrated Add’s talent for identifying earmarks and brands entitled Whose Old Cow?  Addison lived his remaining years in Roswell, New Mexico, where he died on March 24, 1926 around the age of 81.   As a sweat and dirt cowboy, Addison Jones in his declining years had the rare privilege of being recognized as a citizen worthy of this recognition and respect.