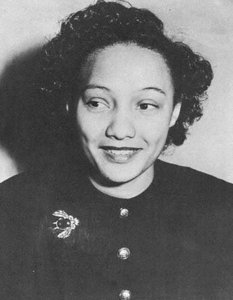 Ada Lois Sipuel Fisher was a leading activist, attorney, and educator who opened higher education to African American students in Oklahoma, and laid the foundation for the Brown v. Board of Education decision.  After graduating from the segregated Langston University in 1945, Fisher volunteered to be the test case for admission to the University of Oklahoma (OU) Law School.

Fisher’s protracted case involved  NAACP attorney Thurgood Marshall and Oklahoma attorney Amos T. Hall.  When denied admission on the basis of race, Fisher filed a suit asserting that she must be admitted to the OU Law School since there was no comparable facility for African American students.  Losing in state courts, Marshall argued Sipuel v. Board of Regents of the University of Oklahoma before the Supreme Court. The Supreme Court reversed the lower courts in 1948, but the state quickly created a makeshift law school in the state capital building.  Fisher was admitted  to OU when this facility closed in 1949. The contemporaneous Oklahoma case, McLaurin v. State Regents for Higher Education, ended the segregated seating and discriminatory treatment Fisher and other African American students experienced after admission.

Fisher later practiced law in Oklahoma City representing clients in segregation cases.  She returned to Langston University to be its public relations director in 1956 and a full time faculty member in 1959.  In 1991 she received an honorary doctorate from the University of Oklahoma and accepted appointment to the OU Board of Regents the following year.