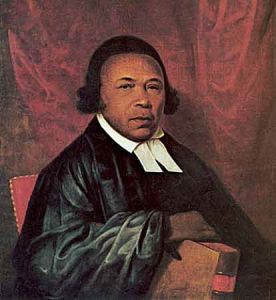 Absalom Jones was born into slavery in Sussex, Delaware in 1746.  He taught himself to read in his early teens from books he purchased by saving pennies given to him by visitors to his master’s home.  At the age of sixteen, Jones’ family was separated when his immediate family members were sold and he was taken to Philadelphia, Pennsylvania by his new owner.  Jones worked as a clerk in his owner’s store by day and was allowed to work for himself and attend an all-black school at night.

In 1770, Jones married a fellow slave, and through hard work and the help of friends and his father-in-law, he was able to buy his wife’s freedom.  Jones saved enough to purchase his own freedom in 1784.  He was an active member of St. George’s Methodist Episcopal Church in Philadelphia and served as lay preacher for the black members of the congregation.  In 1786, Richard Allen joined Jones at the church and their futures would forever be intertwined.  The black membership at St. George’s increased tenfold as a result of the evangelistic efforts of Jones and Allen.  But this increase was not welcomed by the white members of the congregation.  Instead of praising their efforts, church officials responded by attempting to segregate the black congregants.  During a Sunday service in November 1786, ushers attempted to remove all blacks, including Jones, from the main floor of the church to the balcony.  Jones, Allen, and the black members of the congregation promptly left the church as a group.

Jones and Allen subsequently founded the Free African Society on April 12, 1787.  Members of this organization met regularly and paid dues which were used to benefit those in need.  This organization was crucial in caring for the sick and dying of Philadelphia when a yellow fever epidemic swept the city in 1793.  Out of this society grew The African Church, organized on July 7, 1791.  Both Jones and Allen wanted to remain affiliated with the Methodist church, but their followers overwhelmingly voted to affiliate themselves with Episcopal Church as a result of their persecution by the Methodists at St. George’s.  Allen disagreed with this decision and withdrew from the African Church, taking a small number of followers with him.

Despite the split in The African Church, Jones and Allen continued to work together.  They were among the founders of the African Masonic Lodge in Philadelphia in 1798.  The two men also led the black community in petitioning the Pennsylvania State Legislature for the abolition of slavery in 1799.  In 1800, they sent a similar petition to the United States Congress.  Jones and Allen also founded the Society for the Suppression of Vice and Immorality in 1809.  In 1816, Jones saw his friend Allen consecrated the first bishop of the newly formed African Methodist Episcopal Church.  And in 1817, the two men were united again when they condemned the newly formed American Colonization Society, which encouraged freed slaves to return to Africa.  One year later, Absalom Jones died at his home in Philadelphia on February 13, 1818.