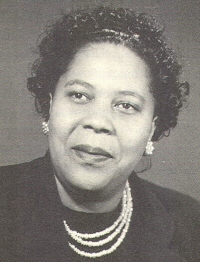 Moranda Smith was a union organizer and rank-and-file leader of tobacco workers in North Carolina, who throughout the 1940s initiated a challenge to the racial discrimination, disfranchisement, and economic exploitation of workers in the South. The first African-American woman to sit on an international union’s executive board, Smith’s life marks the development of an integrated, civil rights–focused tradition of unionism in America.

Born in Dunbar, South Carolina to a sharecropping family, Smith moved to Winston-Salem, North Carolina, when she was five years old.  After graduating from high school in 1933, Smith began working at R.J. Reynolds, the manufacturer of Camel cigarettes and one of the largest tobacco corporations in the world. The Winston-Salem factory, with a workforce that was 40% black and majority female, represented the largest concentration of industrial workers in the region.  Paid little more than minimum wage, subject to arbitrary discipline, and, like every factory in the South, segregation with the plant, workers formed the Tobacco Workers Organizing Committee (TWOC) in 1942 to challenge these conditions.  They were assisted by Communist Party (CP) which had long sought to build multiracial unions in the South.

A sit-down strike that began June 17, 1943, marked the beginning of TWOC’s union drive and of Smith’s involvement in the union. Though initially unsure of the union’s ability to win any gains against the tobacco giant, Smith was gradually convinced of the possibilities for labor organizing, in part because of the special commitment of Communist Party organizers to developing female leadership in the union. By December of that year, TWOC had successfully voted to become the Food, Tobacco, Agricultural, and Allied Workers union (FTA), affiliated with the new inclusive and democratic union federation, the Congress of Industrial Organizations (CIO). Local 22, Smith’s Winston-Salem local, soon became the most militant and active local in the union.

By November of 1945, Smith was elected by her coworkers to chair Local 22’s educational committee. Her commitment to the union, as well as her reputation as a forceful negotiator and inspiring public speaker, soon put her at the head of the local. In January of 1947, the FTA elected Smith to its executive committee, making her the first African-American woman to hold an executive position on the board of an international union. She was later appointed the FTA’s regional director.

Smith, like many other shop stewards and union activists, had joined the Communist Party, and through her involvement in both organizations, helped to develop what would be termed “civil rights unionism” in the South, which connected workplace grievances to broader issues of social welfare and civil rights. Local 22 and FTA became involved in voter registration campaigns, spoke out against Jim Crow segregation, pressed for the enactment of civil rights legislation, and helped revitalize the Winston-Salem chapter of the National Association for the Advancement of Colored People. Smith and the FTA also worked to organize 10,000 other tobacco workers in the region and took active part in the CIO’s campaign to organize the deeply segregated and anti-labor south, dubbed “Operation Dixie.”  Moranda Smith died from a stroke on April 12, 1950 at 34, and was remembered in one of the largest funerals in Winston-Salem history.