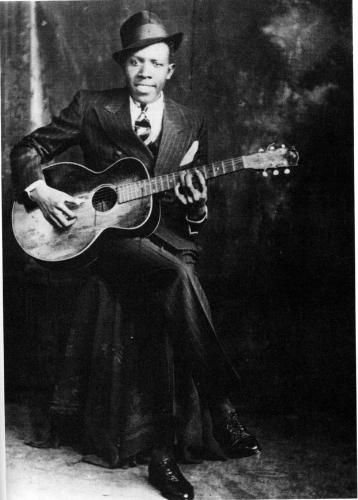 Robert Johnson was the eleventh child of Julia Major Dodds.  Born out of wedlock, Johnson did not take the Dodds name. He grew up with his mother in Hazlehurst, Mississippi but soon moved up to live with his father, Charles Dodds, in Memphis. Charles Dodds changed his last name to Spencer and so Robert was known in his younger years as Robert Spencer. Around 1918, Johnson moved to an area around Robinsonville and Tunica, Mississippi to rejoin his mother who had remarried. Not much is known about Johnson’s childhood other than he was always interested in music. People in the Delta who knew Johnson claimed played the diddley bow when he was younger. A diddley bow is wire attached to nails sticking out of houses. A person could then hit the wire with a stick and use an empty bottle that slides along the wire to change the pitch.

In his teenaged years Johnson met Son House and Willie Brown, two Delta blues musicians who would become his musical mentors.  Young Johnson followed them and other musicians as they played in small Delta towns.  Often he performed on street corners or in front of barbershops playing blues and on occasion jazz and even country music for tips on his acoustic guitar and harmonica.  It was here that Johnson honed his showmanship and his remarkable combination of singing, guitar-playing and songwriting talents.

In 1931 Johnson was popular enough to begin playing in bars and nightclubs traveling through the region as a wandering musician, he was accompanied only by Johnny Shines, himself an up-and-coming blues artist.  Much of what we know about Johnson during his seven years of touring comes from the accounts provided by Shines. While in Jackson, Mississippi in 1936, Johnson caught the eye of a talent scout H.C. Speir who arranged his first recording session in San Antonio, Texas.  Here Johnson recorded for the first time a number of songs he played across the Delta including “Come On In My Kitchen,” Kind Hearted Woman Blues,” “Cross Road Blues” and Terraplane Blues which became a regional hit, selling 5,000 copies.  Johnson recorded again in Dallas, Texas in 1937 and began tours that took him as far north as St. Louis.  Still most of his performances remained in the Mississippi Delta.  For the only time in his life however Johnson enjoyed a modest and steady income.  Ironically Columbia Records producer John Hammond, who had heard Johnson’s recordings, sought him out to perform at black music concert in New York’s Carnegie Hall in 1938 until he learned of Johnson’s death.

Robert Johnson, however, lived the life he described in his songs.  Married three times and living periodically with a number of women, he died in 1938 with the cause of death in dispute. Some people claim he was shot while others believe he was poisoned. His official death certificate, however, states that Johnson died of syphilis.

Despite his brief 27 year life Robert Johnson became a major influence on rock music in the 1960s and 1970s when Columbia Records in 1961 released the album, King of Delta Blues, which was a compilation of his early recordings.  The musicians and musical groups who claimed to have been influenced by his style include Bob Dylan, the Rolling Stones, Jimi Hendrix, Led Zeppelin, the Allman Brothers, and Eric Clapton.  Johnson has also been the subject of a number of documentaries including Crossroads (1986), The Search for Robert Johnson (1992) and Eric Clapton—Sessions for Robert Johnson (2004).