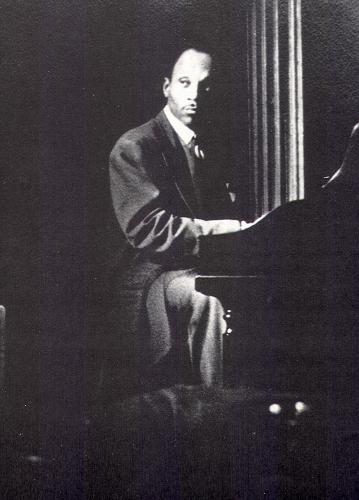 Pianist Cecil Young’s quartet exploded onto the Seattle jazz scene in 1950, introducing the rhythmic fire of bebop to an eager new audience.  His quartet’s debut record was immediately successful, and Young, known for his devilish sense of humor as well as his immense musical talents, rose to great but brief regional prominence.

A vaudeville entertainer from New Haven, Connecticut, Cecil Young arrived in Seattle on a Palomar Theater date.  Seeking to break out of the confinements of vaudeville piano, Young soon filled the void left by pianist Dave Henderson at the New Chinatown nightclub.  For the gig Young assembled his quartet of local tenor saxophonist Gerald Brashear, white bassist Traff Hubert, and ex-Detroiter Jimmie Rodgers on drums.  After the New Chinatown gig, Taylor secured a slot at the Elks Club in Seattle’s Chinatown.  The Club had long been a center for local and national jazz performers.

The Cecil Young quartet quickly became a regional sensation.  Commanding breakneck tempos, the quartet’s aggressive rhythm section mesmerized crowds across Seattle, Tacoma, and Yakima.  Young was a modern piano player whose sparse, fierce, and harmonically sophisticated playing propelled his quartet.  Yet Young was also a complete entertainer – delighting audiences with his unique humor and talents as a tap dancer and singer.  In addition to the tenor saxophone, Gerald Brashear was also an accomplished congas player, and he frequently sang scat with Young.  (Brashear’s scat performance on the quartet’s “Who Parked the Car?” seemed to exist in a class by itself.)

When Sid Nathan, the president of King Records, visited Seattle, Young and his manager pitched him the quartet.  Nathan was impressed, and using previously-taped performances from the Ladies Music Club (now the Harvard Exit movie theater) and the Metropolitan Theater, Nathan mastered Young’s debut album.  Released in 1951, Concert of Cool Jazz became a local hit, and its influence reached beyond Seattle, particularly to the San Francisco Bay area.  On the strength of the album the quartet soon signed with the William Morris Agency, booking a national tour.  The tour culminated in a performance at New York’s famed Birdland, where the quartet opened for singer Sarah Vaughan.  The tour proved to be a disappointment, however, as Concert of Cool Jazz failed to catch on nationally and work opportunities steadily declined.  Disappointed and impatient, members of the quartet struggled with drug abuse, and the group soon disbanded.  Cecil Young never returned to Seattle, though he is believed to have performed professionally until his death in the 1970s.

Though it dissolved soon after its initial success, the Cecil Young quartet nonetheless marked a high point for Seattle’s Jackson Street jazz scene in the 1950s.  Soon after the quartet’s peak, a shift in state liquor laws rendered the Jackson Street nightclub community irrelevant, pushing the scene downtown, while the amalgamation of the local black and white musicians’ unions threatened the sense of black community that had defined Jackson Street.